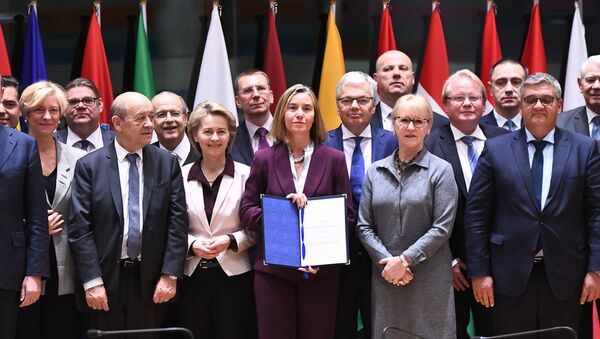 MOSCOW (Sputnik) - The European Commission has proposed to increase EU security spending by nearly 30 percent, from 3.5 billion euros ($4.1 billion) to 4.8 billion euros, for the 2021-2027 budget period to counter growing security threats, the Commission said in a press release on Wednesday.

"For the next long-term EU budget for 2021-2027, the Commission is proposing to substantially increase the current security funding – from €3.5 billion to €4.8 billion," the press release said.

EU to Spend Some $287Mln on Defense Industrial Program in 2019
European Commission President Jean-Claude Juncker has proclaimed security as one of the priorities in his Political Guidelines for the next European Commission in 2014, when he assumed office. The current EU long-term budget period, which began in 2014, is set to end in 2020. In 2019, the European Union is expected to adopt its next long-term budget for the 2021-2027 period.

Greek Foreign Minister Calls for Reforming EU, Creating Own Defense System
Macron laid out his plan for EU reforms in September 2017, suggesting that the European Union should have a joint intervention force. However, the proposed force, known as the European Intervention Initiative, would stay separate from other EU defense cooperation programs such as PESCO.

A joint EU program called Permanent Structured Cooperation (PESCO) was adopted by the Council of the European Union in March. It foresees the possibility of a number of EU member states working more closely together in the area of security and defense in a binding and permanent framework. The program consists of 17 projects involving 25 countries.