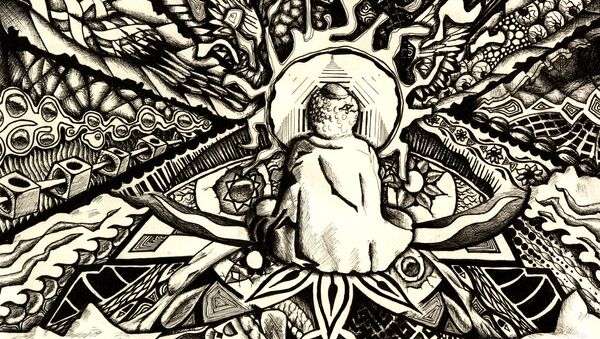 If you’ve ever thought that maybe all your depression or anxiety needed for a cure was a really good acid trip, congratulations: there is empirical evidence to support this theory.

A "preponderance" of evidence from human imaging, postmortem studies and animal studies suggests that the atrophy of neurons in the prefrontal cortex "plays a key role" in the physiological aspect of depression and similar conditions, according to 16 researchers who co-authored a paper published June 12 in the journal Cell Reports.

The prefrontal cortex is the region of the brain responsible for tasks like decision making, personality expression and moderating one's behavior in different social settings.

The promotion of structural and functional improvements in the prefrontal cortex effected by LSD, magic mushrooms and DMT is "accompanied by increased synapse number and function, as measured by fluorescence microscopy and electrophysiology," the study notes.

More synapses mean that the neurons are ‘talking' to one another more, while increased synapse function means that the ‘talking' happens more efficiently when nerves release signals to each other via neurotransmitters.

According to the researchers, the structural changes seem to be driven by the "stimulation of the TrkB, mTOR, and 5-HT2A signaling pathways and could explain the clinical effectiveness of these compounds."

In effect, the atrophy of the prefrontal cortex found in patients with depression and similar conditions can begin to reverse following an experience of tripping on acid or mushrooms.

These changes in the brain aren't thought to take long periods of time, but instead are described by the researchers as happening "rapidly" after the drug dose. What's more, psychedelics "have demonstrated and long-lasting antidepressant and anxiolytic effects in the clinic after a single dose," the study said.

Along with the drug ketamine, which was used as a basis for comparison for similar effects but was not included in the study, acid, mushrooms and DMT form a group of compounds that verifiably improve structural plasticity in the important prefrontal cortex. The researchers propose classifying these substances as psychoplastogens, "from the Greek roots psych- (mind), —plast (molded), and —gen (producing)." Ketamine, a sedative widely used in the 1990s and 2000s as a club drug, has demonstrated "remarkable clinical potential" as a fast-acting treatment for depression and anxiety, even in "treatment-resistant populations," in at least six studies since 2000.

"Our work strengthens the growing body of literature indicating that psychoplastogens capable of promoting plasticity in the PFC might have value as fast-acting antidepressants and anxiolytics with efficacy in treatment-resistant populations," the researchers concluded.

Though long carrying the stigma of being a party drug, ecstasy or MDMA has been dubbed a "breakthrough" therapy by the US Food and Drug Administration for people with post-traumatic stress disorder. In January, researchers around the world in US and Canada kicked off the third and final phase of clinical testing that will precede prescription-ecstasy treatments becoming legal by 2021 in the US.