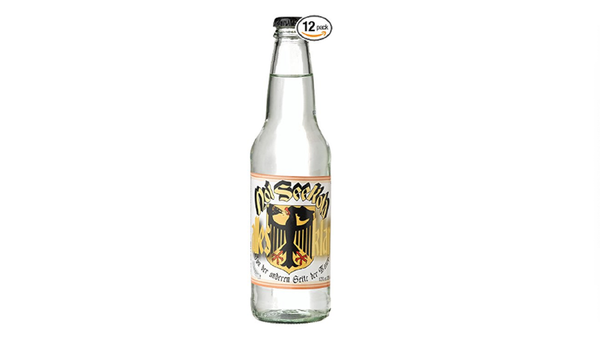 © Screenshot / Amazon
Subscribe
A Utah grocery chain is in damage control mode after a customer complained on Twitter about an offensive product on sale at its stores: a clear soda called “Not See Kola” with a label resembling the Parteiadler - the eagle that served as an emblem of the Nazi government.

"Shocked & horrified to see that @maceysgrocery carries "Not See" (Nazi) from Real Soda of Utah. Please stop selling this offensive product! Six million Jews were murdered by Nazis! You have lost my business," the customer wrote to the grocer on Twitter, although her she has since made her account private.

"Thank you for bringing this matter to our attention," the company replied. "We apologize and our stores have been instructed to remove the product from shelves immediately. This item was not approved at a corporate level."

According to the local NBC affiliate KSL-TV, the grocery chain said that an employee at one of their stores ordered the shipment and that it was never approved by corporate management. They vowed to remove the product and two other sodas, one called "Leninade," a portmanteau of "Lenin," the Bolshevik revolutionary leader, and "lemonade;" and another called "Orthodox Jooce" that features Hebrew-stylized lettering.

But the store was merely carrying these products. Leninade and Not See Kola are manufactured by the California-based Real Soda in Real Bottles, Ltd., which has a distributor in Utah and other states. Orthodox Jooce appears to be a single-soda company.

The Not See Kola's bottle says "From the other side of the wall" in German and features an eagle drinking a can of pop. The eagle, which seems to be modelled after the Nazi-era emblem, actually more closely resembles the Bundesadler, which is currently used by the German government and is distinct from the Nazi, Second German Empire and Weimar Republic-era eagles called the Reichsadler, although that distinction is probably lost on most customers.

​When a different customer complained directly to the distributor about the bad branding, the company said, "We respect and understand that everyone has differing senses of humor. Our goal is to provide a wide variety of sodas and flavors that everyone can enjoy. If there is a flavor or brand that you'd like to see in our lineup, please let us know."

Their website contains a number of broken links, but a button labelled "Czech Out Our Selection" eventually leads to a full list of the company's products, most of which do not have objectionable names. The Not See Kola comes alongside the with the description "Maybe you can't change a German, but you can see the the cola & taste what you can't see."

Leninade's description: "'Better than expected', a taste worth standing in line for! Put the Cold War into your refrigerator! Our five-year-plan: drink a bottle a day for five years and become a hero of socialist flavour!"

It isn't clear how long Real Sodas Real Bottles has been making the Nazi-themed pop, but Leninade has been seen in circulation since at least 2002.

In fairness, some of the sodas on the page are labelled kosher. But the third product pulled by Macey's, which is not manufactured by Real Sodas Real Bottles, is surprisingly not. "Can you believe that Orthodox Jooce is not officially ‘Kosher For Passover'?" a post on the company's Facebook page reads. "But don't let that stop you from enjoying it the rest of the year! It doesn't have any non-kosher-for-Passover ingredients but it's not been inspected as we are too small of a company to afford the inspection!"

The company's About section is no less kitschy. It simply says "Orthodox Jooce is so sweet it's Heavenly! Enjoy it with a ribeye… or with a Rabbi! Concord Grape Soda that Elijah would drink if he were a teetotaler!"

In Jewish tradition, during the Passover Seder, which commemorates the liberation of Jews from 2,000 years of slavery in Egypt, a glass of wine is poured for the prophet Elijah, who is invited to join the Seder. The front door to the home is to be left opened for him to enter.