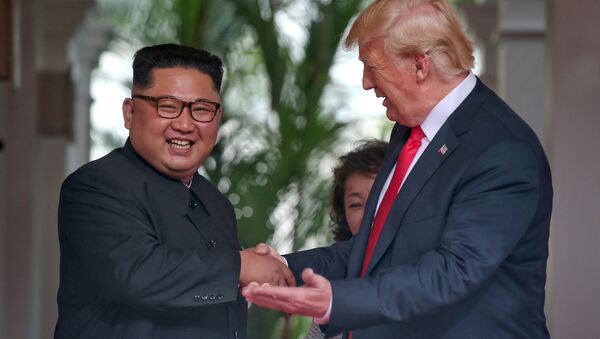 After trading hawkish insults and military threats against each other for almost one year, Trump and Kim Jong-un made history when they shook hands with each other for the first time outside the Capella Hotel in Singapore, where the two leaders spent the whole morning negotiating on Tuesday.

However, despite Trump's claim that his meeting with the North Korean leader was "better than anyone could have expected," the joint statement released at the end of the summit failed to include details on how North Korea plans to move toward denuclearization, far away from the kind of "complete, verifiable, irreversible denuclearization" the US side has insisted on.

Following the Inter-Korean summit in April, Kim expressed his commitment to denuclearization in the Panmunjom Declaration.

Political analysts argued that the results from the summit in Singapore tilted heavily toward Kim's favor.

"This is a completely useless agreement. The most important result from the summit is this is a victory for Kim Jong-un and a defeat for Trump. That's because this is exactly Kim Jong-un wanted all along, verbal pledges to denuclearization without a specific timeline. This is the best result for him. This is also exactly the kind of result Trump didn't want to see before the summit because such result would attract criticism that he achieved nothing," Zhang Baohui, the director of the Center for Asian Pacific Studies at Hong Kong's Lingnan University, told Sputnik.

The Hong Kong-based scholar pointed out that North Korea's commitment on denuclearization in the joint statement was not very different from Pyongyang's previous pledges.

World
Kim Commits to 'Complete Denuclearization of Korean Peninsula' in Joint Document
"The joint statement does not have any details about denuclearization. This is more of a public relations statement to let the world know that he made a deal at the summit. But what kind of deal he cut? At least, we couldn't see any results from the four points in the joint statement. It's the same old tune North Korea has been using for over 20 years on promises to denuclearize," he said.

The expert explained that Trump could have softened his previous harsh stance on the issue, because of recent problems during the G-7 summit.

"After the recently failed G-7 summit, it's impossible for Trump to accept to consecutive defeat in foreign affairs. It would make people feel he's incompetent, which is what he worries about most. That's why he has to make sure the summit [with Kim Jong-un] appears to be a success on the surface. This is why the summit has become a victory for Kim Jong-un, because the kind of quick and verifiable denuclearization was not even mentioned in the joint statement," he said.

Trump faced a lot of criticism from traditional allies such as Canada during the recently concluded G-7 summit after he threatened to slap harsh tariffs against those allies over trade imbalances with the United States.

During the press conference after the summit, Trump argued that he knows Kim Jong-un is serious in making a deal with the United States, in response to a reporter's questions on how to make sure North Korea is not just making empty promises on denuclearization.

"I think can you ensure anything? All I can say is they want to make a deal. That's what I do. My whole life has been deals. I've done great at it. I know when somebody wants to deal, and I know when somebody doesn't. A lot of politicians don't. That's not their thing. That's my thing. I just feel very strongly. My instinct, my ability or talent [tells me] they want to make a deal," Trump said.

World
Iran to North Korea: Don’t Trust ‘Deal-Breaker-in-Chief’ Trump
From threatening to bring "fire and fury" upon North Korea and calling Kim "little rocket man" last year, to putting his trust in the North Korean leader's commitment to denuclearization, Trump once against acted based on his impulse. Political analysts pointed out the change in attitude toward Kim fits into Trump's personality.

"I think he's that kind of person, whose personality can change from one day to another. I think it was a big mistake on the part of Trump to praise Kim Jong-un, when the North Korea leader hasn't done anything to improve the human rights situation in his country. North Korea remains to be a very repressive regime. To harshly criticize Canadian Prime Minister Justin Trudeau at the G-7 summit and then come to Singapore to praise one of the worst dictators in the world, it wasn't quite fitting to the remarks coming out of the president of the United States," Kim Jae-chun, an international relations professor at Sogang University in Seoul and a former South Korean government adviser, told Sputnik.

Failed to Give Up Weapons

The expert argued that if Kim is indeed serious in his commitment in denuclearization, as Trump believes, the North Korean leader could easily agree to give up a portion of the nation's nuclear arsenal as a sign of good faith.

"I think the Trump administration understood all along North Korea has to dismantle a significant portion of the warheads and nuclear materials they have produced, which can be done easily if you have the intentions to denuclearize. That has been the consistent demand coming out of the Trump administration in recent months up until the summit. The behind-the-scenes diplomacy between senior officials from both sides has been focusing on resolving this issue. But Trump was still not able to convince North Koreans to make such concessions this time," he said.

World
China Hopes North Korea, US Agree on Denuclearizing Korean Peninsula
Trump stated during the press conference that more meetings were needed to work out details on how North Korea would dismantle its nuclear arms program. But the Seoul-based scholar believes it is unlikely for the working level discussions to secure further concessions from North Korea, despite offering to halt joint military exercises with South Korea.

"Trump promised to halt joint military exercises between the United States and South Korea. That's really a big concession he offered to North Korea. Let's see if such concessions can offer enough incentives for North Korea to give up its nuclear weapons. The two leaders couldn't even sort out the differences during the summit. I doubt subsequent discussions can resolve those key differences they weren't able to sort out this time," Professor Kim said.

However, other Seoul-based political analysts argued that continued diplomatic efforts were still a much better option than any military option in trying to resolve the nuclear crisis on the Korean Peninsula.

"Despite there's no specifics [on denuclearization] if you compare where were one year ago, where we are today is still much more positives. Diplomacy is always part of a slow process. If you think about a five-year program to improve the relations between two countries, we're at the beginning of that," Jeffrey Robertson, a visiting fellow at the Asia-Pacific College of Diplomacy of the Australian National University and an assistant professor at Yonsei University in Seoul, told Sputnik.

As a scholar living in the South Korean capital, Professor Robertson values any efforts to prevent a military conflict on the Korean Peninsula.

The expert believes that even if North Korea continues to obtain part of its nuclear arsenal, it will still be a much better choice than forcing Pyongyang to give up its nuclear weapons through military options.