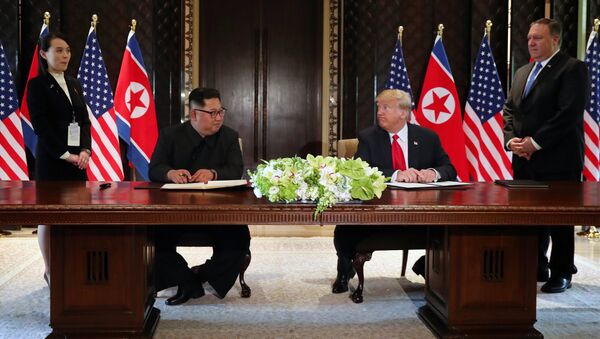 WASHINGTON (Sputnik) - US President Donald Trump's agreement with North Korean leader Kim Jong-un may benefit the Korean Peninsula in the short term, however, the gain will come at the expense of weakening US stance in the region, Senator Tim Kaine said on Tuesday.

"My worry is that the president might be willing to do a deal that produces some gain on the Korean Peninsula, short-term gain, but at the expense of broader [US] withdrawal from the region," Kaine told the Washington Post.

Kaine explained that China is working with North Korea to advance peace negotiations in a way that would lead to more Chinese dominance in Asia.

READ MORE: Trump Elevates N Korea to Level of US in Haste to Reach Deal With Kim — Pelosi

Trump and Kim signed an agreement at the end of a bilateral summit in Singapore outlining the two countries’ commitment to work towards the denuclearization of the Korean Peninsula.

World
N Korea Offers Nothing as Trump Agrees to Halt US-S Korean Exercises - Hayden
The US president gave North Korea security assurances and indicated he would suspend military drills with South Korea if Pyongyang gives up its nuclear development program.

The senator said the US Congress should be included in drafting or authorizing any possible deal with North Korea. Kain insisted the White House should bring the agreement to Congress and make sure lawmakers are satisfied with its terms.

Upon the conclusion of the summit, Trump said he is willing to invite Kim to Washington, DC for the next round of negotiations.