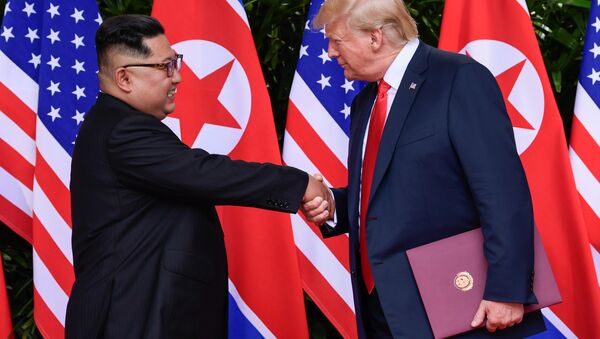 "Kim Jong Un has invited Trump to visit Pyongyang at a convenient time, while Trump has invited Kim Jong Un to visit the United States. Both leaders with pleasure accepted each other's invitations, knowing positively that it would be another important event for DPRK and US relations," the agency said.

Kim-Trump Summit Achievements: US, DPRK Commit to Denuclearization of Peninsula
Earlier, Trump and Kim held a historic summit in Singapore and committed the United States and North Korea to establishing new bilateral relations and building a lasting peace on the Korean Peninsula. Moreover, Pyongyang affirmed its commitment to denuclearize in exchange for security guarantees from Washington.

North Korean media also reported that Trump told Kim about the US intention to lift sanctions against Pyongyang amid further improvement of relations between the two countries.

Meanwhile, the US president praised the event, saying that he had gotten along with the North Korean leader.

…Got along great with Kim Jong-un who wants to see wonderful things for his country. As I said earlier today: Anyone can make war, but only the most courageous can make peace! #SingaporeSummit

​The historic summit ended with an agreement consisting of four points: the agreement to establish new bilateral relations, the decision to join efforts to "build a lasting and stable peace regime on the Korean Peninsula," Pyongyang's confirmation of commitment to denuclearization, and the repatriation of the remains of US military personnel, either prisoners of war or missing in action, from the 1950 to 1953 war.