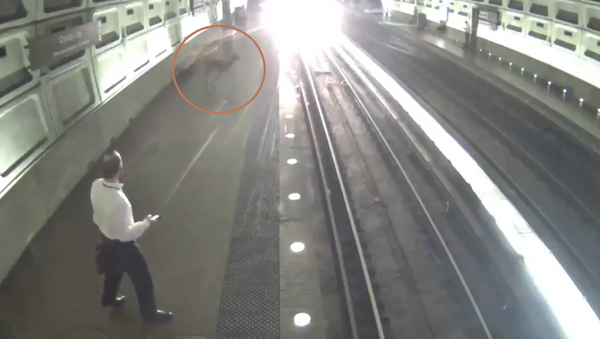 Someone heard about the Capitals’ Stanley Cup parade!

Seems like *everyone* wants to get aboard the @Capitals train this morning! (Crystal City Station, 8:30 a.m. today — this little guy somehow wandered into the tunnel & ended up at the station. Safely exited through the tunnel back toward DCA.) #OHDEER #ALLCAPS #WMATA #StanleyCup pic.twitter.com/3ibeGuYwUe

Riders at the Washington Metropolitan Area Transit Authority's Crystal City platform in Virginia were accompanied by an unlikely patron after a deer stumbled into the station Tuesday morning.

The deer, no doubt frightened by the lights and echoing rumble of the train cars and tracks, was captured racing around the platforms and across the rails while awaiting passengers looked on in confusion and clutched their pearls.

No need to worry, though. The sports-loving buck eventually made it out the tunnel and exited the station, according to WMATA on Twitter. Perhaps he discovered he was low on doe and needed to run back home?