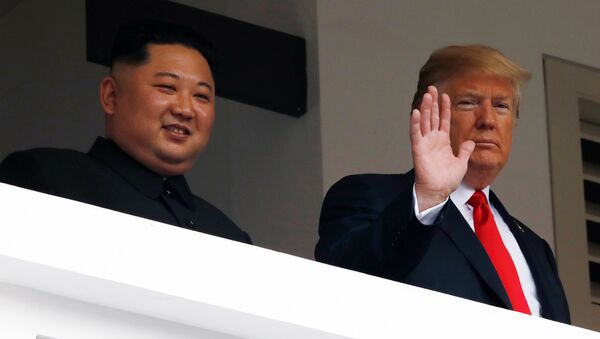 © REUTERS / Jonathan Ernst
Subscribe
BEIJING (Sputnik) - Beijing is hoping that US President Donald Trump and North Korean leader Kim Jong-un will be able to reach consensus on the denuclearization of the Korean Peninsula and create a mechanism for a peace settlement in the region, Chinese Foreign Minister Wang Yi said in a statement published on the ministry's website on Tuesday.

"We are hoping that the leaders of North Korea and the United States will be able to eliminate all disagreements, achieve mutual trust, overcome difficulties and reach a major consensus toward the implementation of denuclearization and creation of a peaceful settlement mechanism on the Korean Peninsula," the statement read.

Other politicians around the world have also addressed the issue. South Korean President Moon Jae-in noted that he "could hardly sleep last night" in anticipation of the summit and also expressed hope for "complete denuclearization and peace."

World Follows Every Step of Historic Trump-Kim Summit
Trump and Kim signed an agreement earlier in the day after their first-ever summit, held in Singapore. The US president has said more details about the document would be made public later on Tuesday, but noted that the agreement was "comprehensive."

The press, however, were able to take a few photos, claiming, that the document reaffirmed commitments to "complete denuclearization" and included "security guarantees" for North Korea.

Despite global enthusiasm over the issue, there are many pragmatic predictions.

Japanese Foreign Minister Taro Kono stated at a parliamentary session, as quoted by the NHK broadcaster, that the complete dismantling of North Korea's nuclear facilities may take no less than a decade, although the destruction of nuclear weapons should not take long.

"There are several steps to denuclearization. The complete dismantling of nuclear facilities will take decades. However, destruction of nuclear weapons and decommissioning corresponding facilities should not take a lot of time," the Japanese foreign minister said.

Twitter Hails Historic Face-to-Face #TrumpKim Handshake (PHOTOS, VIDEO)
South Korean presidential adviser Moon Jung-in has expressed a similar opinion in an interview to the Nikkei newspaper, arguing that the settlement of all issues related to North Korean missile and nuclear programs as well as the dismantling of relevant facilities would take a decade. According to the adviser, North Korea may demand political, economic and military guarantees in exchange for denuclearization.

READ MORE: Expert on Trump-Kim Summit: 'There Will Have to Be Many More Meetings'

Japan's Chief Cabinet Secretary Yoshihide Suga on an earlier occasion also commented on the matter, saying, that the meeting would be "a significant step toward the building of peace and stability in Northeast Asia."