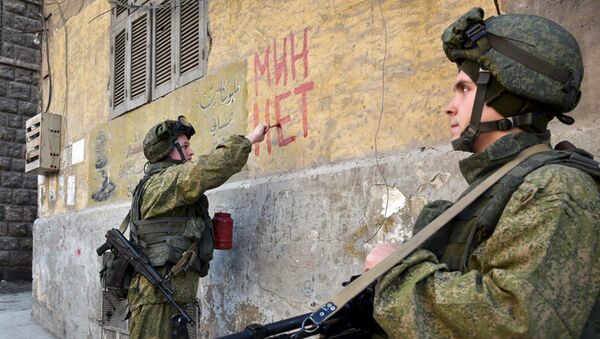 © Photo : Ministry of Defence of the Russian Federation
/
Go to the photo bank
Subscribe
The Syrian army has defused a total of 18 improvised explosive devices, four mines, and seven projectiles in the Palestinian refugee camp of Yarmouk located south of Damascus, Russia’s Syrian reconciliation center said in a statement on Monday.

"Engineering units of the Syrian Army trained by Russian specialists successfully perform tasks to ensure security for civilians and social and economic infrastructure. In the area of the former Palestinian refugee — Yarmouk Camp, the Syrian engineers have checked 30 buildings to defuse four mines, seven projectiles and 18 improvised explosive devices," the statement reads.

WATCH Syrian Army Uncovers Network of Tunnels for Terrorists in Yarmouk Camp
In May, Russian Defense Miniser Sergei Shoigu said that The situation in Syria is improving after the liberation of the Palestinian refugee camp of Yarmouk from Daesh terrorist group. Moreover, Russian minister noted that on the territories controlled by the Syrian authorities, conditions had been created for the return of refugees.

Meanwhile, mine clearance operations in the Middle Eastern country continue. Syrian engineers trained by Russian servicemen have been checking compounds in the Damascus suburbs, which had been recently liberated from terrorists.

The Yarmouk camp was established in 1957 near Damascus to host Palestinian refugees. During the civil war, the camp became a stronghold of terrorists. In April 2015, Daesh militants seized most of the camp and the adjacent Al-Hajar al-Aswad community.

Militants Left Southern Areas of Syria's Damascus Including Yarmouk Camp
Radical groups siding with the Jabhat al-Nusra terrorist group then retreated from the camp and established themselves in the Babilu, Beit Sahem and Yalda communities.

Syria has been in a state of civil war since 2011, with the government forces fighting against numerous opposition groups and terrorist organizations. Russia along with Turkey and Iran are guarantors of the ceasefire regime in Syria. Moscow has also been providing humanitarian aid to residents of the crisis-torn country.

Russian Defense Ministry’s Center for Syrian reconciliation said on Monday, that a total of 68,562 people have returned to their homes in Eastern Ghouta from the camps for refugees and internally displaced persons (IDPs) due to the improving humanitarian situation in the country.

Moreover, the Russian reconciliation center held humanitarian actions in the Asada Mosque and the Zahrat al-Madina School of Aleppo, deploying field kitchens to provide people with hot meals and bread at the end of the Ramadan fasting day.