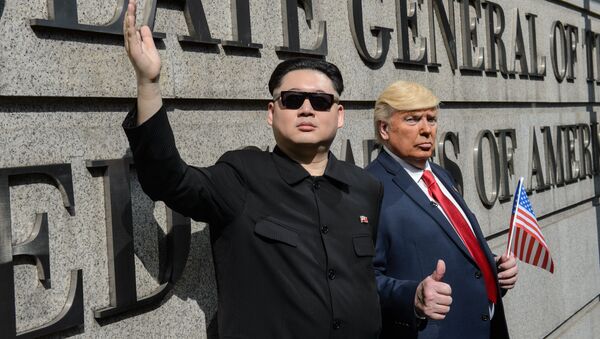 North Korean leader Kim Jong-un and US President Donald Trump are set to meet on June 12. The talks are expected to be devoted to the future of Pyongyang's nuclear program and the lifting of economic sanctions.

Location of the Historic Meeting

The leaders of both countries have already arrived in Singapore, but the actual summit will take place summit at the five-star Capella Hotel, situated on the resort island of Sentosa. Donald Trump and Kim Jong-un are scheduled to meet at 9 a.m. local time (1 a.m. GMT), simultaneously entering the negotiation room via different doors.

The resort is surrounded by a security perimeter that ends half a mile off the island's shores. The security detail will be authorized to search anybody looking for prohibited materials, guns, etc. Drones, banners, flares and flammable materials are among the banned objects.

The key objective for the US will be to successfully negotiate the denuclearization of the Korean Peninsula. Although details are most likely to be determined later by working groups, the US has already laid out the key principles it considers important: a complete, verifiable and irreversible termination of the DPRK's nuclear program.

Kim Jong-un, on the other hand, is unlikely to be willing to discuss the issue of human rights, but has certainly set his eyes on initiating economic cooperation with the US and the rest of the world. This means that the topic of lifting sanctions against Pyongyang will also most likely be on the summit's agenda.

Both, however, rely on family when it comes to policy — Trump on his daughter Ivanka, whilst Kim sent his sister Kim Yo Jong to the Winter Olympics, which was hailed as the first step towards a rapprochement between the two Koreas.