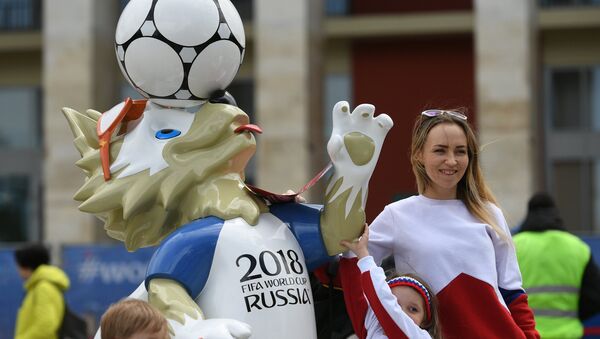 NOVOGORSK (Sputnik) - Russia defender Vladimir Granat said that he hoped that fans viewed the national team favorably ahead of the 2018 World Cup.

"Honestly, I deleted all the apps [from my smartphone], I don't read anything, but I hope that the fans have a good opinion of the [Russian] team and the World Cup on the whole," Granat told journalists.

He added that the team had watched their opponents' last matches and were training hard for the tournament.

"I think we'll go into the matches in an optimal condition," the 31-year-old Rubin Kazan player said.

Granat also named Colombia as one of the favorites to win the World Cup.

"The team's lineup is strong," he said.

Russian Team Training at Full Strength Ahead of 2018 FIFA World Cup
Russia will host its first-ever FIFA World Cup from June 14 to July 15, with the games set to be held in a total of 11 cities, Moscow, St. Petersburg, Sochi, Kazan, Kaliningrad, Volgograd, Nizhny Novgorod, Samara, Saransk, Rostov-on-Don and Yekaterinburg.

The host nation will face Saudi Arabia at Moscow's 81,000-seat Luzhniki Stadium on Thursday, before taking on Egypt and Uruguay in their other two Group A matches.