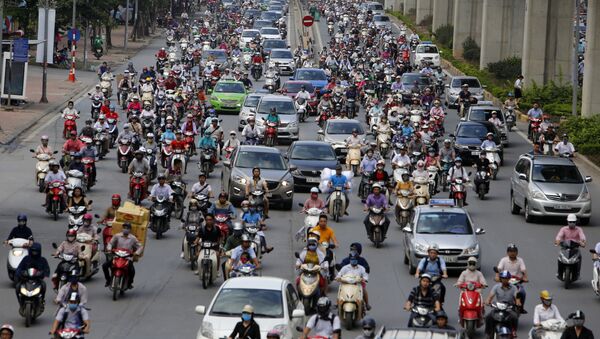 © AP Photo / Tran Van Minh
Subscribe
Nationwide protests broke out in several major cities in Vietnam, several participants have already been arrested in Hanoi, although the rallies have been described by observers as peaceful.

People have gathered and protested in several cities since this morning, including Hanoi, Ho Chi Minh City, Nha Trang, Da Nang, and even smaller areas such as My Tho — Tien Giang, Ho Nai — Dong Nai and a few Catholic areas in Nghe An Province.

At least a dozen people were arrested in Vietnam's capital, as anger mounts over a proposal to grant companies lengthy land leases, according to the AFP.

Social media have shared photos and videos of the demonstrations.

The draft law that became the reason for the rallies, would allow 99-year concessions in planned special economic zones in Vietnam, which some view as deals favorable to foreign and specifically Chinese firms. The draft gives them greater incentives and fewer limitations, in an attempt to foster growth in target areas.

"The bill is designed to give a strong boost to the development of three special administrative and economic units, including Van Don in Quang Ninh province, Bac Van Phong in Khanh Hoa province and Phu Quoc in Kien Giang province, and room for institutional experiments," the government said in a statement.

The protesters assume that the Communist government will give Chinese investors a contract over three islands in the South China Sea, amid deteriorated relations between the two countries over the disputed territory there.

Picture from a colleague — protestors outside of Diamond Plaza in Saigon. pic.twitter.com/tr4CviYnsb

Prime Minister Nguyen Xuan Phuc last week told local media the 99-year term would be decreased, although he did not specify the details.

Protests are a rare way of showing dissent in Vietnam, as a conservative leadership has taken a more aggressive stance against activists since 2016.

Vietnam is among several countries in the region that have claims in the South China Sea, through which an estimated $5 trillion in trade passes each year.