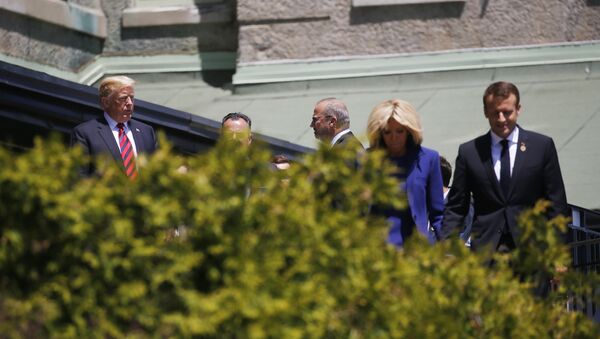 © REUTERS / Leah Millis
Subscribe
WASHINGTON (Sputnik) - The US-EU-Canadian battle over trade tariffs instigated by President Donald Trump is hanging over the G7 Summit like a specter and may accelerate the collapse of the transatlantic alliance, analysts told Sputnik.

This is First Time G7 Is So Controversial, Opposed to US – Academic
Macron on Thursday said G7 members might bar the United States from signing the joint communique at the end of the summit to isolate Trump in response to US tariffs on imported steel and aluminum.

Trump in a series of tweets this week attacked Macron and Trudeau to defend the US tariffs, accusing their governments of hurting American workers and farmers through unfair trade practices, citing a $150 billion deficit with the EU and Canada’s 300 percent markup on dairy products.

Trump last week announced that the EU, Canada and Mexico would no longer be exempt from 25 percent import tariffs imposed on steel and 10 percent for aluminum. The College of EU Commissioners earlier this week approved a decision to impose rebalancing duties against the United States in response to Trump’s tariffs.

Author and political commentator Dan Lazare told Sputnik that the escalating rows surrounding the G7 summit were reminiscent of the disintegration of the Warsaw Pact in 30 years ago.

"The Atlantic alliance is disintegrating nearly as rapidly as the Soviet bloc did in the 1980s," Lazare said. "Trump, Old Europe [and] New Europe are all going their separate ways in response to Iran, Jerusalem, Gaza, global warming, Russia, refugees, and now trade. Everyone is jockeying for advantage now that US imperial power is cracking wide open."

'Didn't You Guys Burn Down White House?': Trump Justifies Tariff War - Reports
The United States was finding it increasingly difficult to get its allies to maintain economic sanctions against Russia and Trump’s controversial personality and policies were also undermining US claims to global leadership, Lazare noted.

"Anti-Russian sanctions are increasingly unpopular, while the whole world now knows that it has a mad man to contend with in the person of Donald Trump," he said. "Eventually, new alliances will emerge from the wreckage, most likely involving Germany, Russia, and China. But in the near term, conditions can only grow more disorderly."

Eurasian Business Coalition Vice President Ralph Winnie agreed that the United States and the EU appeared to be on a collision course in their trade disputes and warned that the Brussels was likely to escalate its retaliatory moves against US experts to the bloc.

WATCH Protests in Canada Ahead of G7 Summit Amid EU-US Row (PHOTOS, VIDEOS)
However, Winnie also stressed that Trump could still present more moderate proposals and use the escalating confrontation to leverage compromise agreements.

"Trump is a deal maker. He is a negotiator. He has veered from threats to compromises and then back again to threats, sowing confusion in global capitals. He has created an atmosphere of uncertainty that will bring people to the negotiating table," Winnie said.

Trump’s moves were going to spark a fierce reaction, Winnie acknowledged. But the president was looking to advance constructive negotiations after breaking the current status quo, he suggested.

'Tired of School Mistress Tone': Trump to Skip G7 Talks With UK's May - Reports
"We have to look out for what this really means. He [Trump] is trying to create a dialogue to get them [the EU] to come to the table," he said.

Winnie said Trump had avoided a major rupture in trade relations so far with China.

"Commerce Secretary Wilbur Ross said China is paying their tariffs. It’s only the EU that is insisting on a confrontation. EU trade negotiators are open to discussion but they won’t negotiate under threat," he said.