Ten Years On, Putin Told Them So 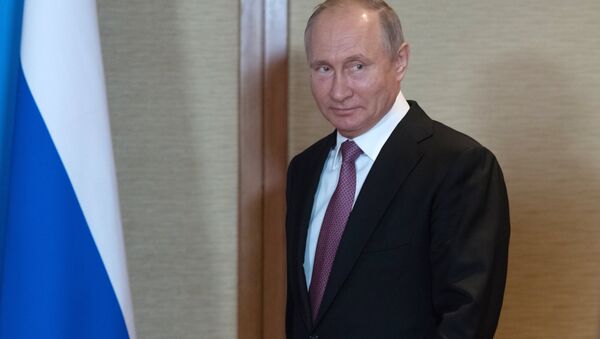 Finian Cunningham
All materials
You can hardly blame Russian President Vladimir Putin for enjoying a “told you so moment”. He lately reminded European leaders that their all-out spat with the United States is what happens when you are too deferential to American hegemonic ambitions.

This predicament is just what the Russian leader had warned against almost 10 years ago in a famous speech he delivered in Munich on growing global disorder.

Last week, during his nationally televised marathon Q and A with Russian citizens, Putin referred to the unprecedented trade tariffs that President Trump is slapping on European states.

Rightly, Putin said those penalties were effectively a form of economic sanctions imposed by Washington on its supposed allies.

Putin hinted that the Europeans were now getting a taste of the noxious medicine that has been doled out to Russia by Western powers which have inflicted sanctions on Moscow over dubious allegations concerning the nearly four-year-old Ukraine conflict.

The acrimonious fallout from Trump's de facto trade war with Europe, Canada and Japan was all-too apparent during the testy G7 summit held this weekend in Quebec.

Canadian Prime Minister Justin Trudeau decried American "illegal" trade measures, while French President Emmanuel Macron jettisoned his earlier "bromance" with Trump to declare that the group of Western industrialized countries plus Japan may reformat as the "G6" without the US, in order to counteract Washington's "hegemony".

G7 Summit Highlights: Tusk Accuses Trump of Challenging 'International Order'
Speaking on behalf of the European bloc, Donald Tusk, the European Council President, expressed his frustration at Washington's increasing disdain for multilateralism by saying that under Trump the United States is destroying the "rules-based global order".

But hold on a moment. Let's go back to the landmark speech made by Putin in 2007 at the Munich Security Conference. More than a decade ago, the Russian leader delivered a blistering, prescient warning back then, when he said that American hegemonic ambitions of unipolar power would inevitably disrupt the global balance.

As far back as 2007, Putin explicitly admonished that Washington's drive for unrivaled global dominance would end up bringing chaos to international law and order. This was during the heyday of post-9/11 US-led wars in the Middle East, which the European states all-too deferentially went along with despite these wars being illegal and unleashing ongoing global problems of terrorism and refugee crises.

READ MORE: As Relevant as Ever: Why Trump Needs to Take Putin's 2007 Munich Speech to Heart

Putin's essential lesson in Munich more than 10 years ago was that the world order of multilateralism and diplomacy could not withstand the assault of a would-be hegemon, whether that is the US or any other power.

Today, the Russian president's analysis has been vindicated, as can be seen from the shock among the Europeans and Canadians at being treated like nothing more than minions by an American bully.

Washington under Trump is showing its true colors towards supposed "allies". For Washington, there is evidently no such thing as allies, only clients, who must do the bidding of American capitalism and imperialism. Any dissent is not tolerated, under pain of economic retribution, which the Europeans and Canada in particular are now getting a bitter taste of.

The contrast between the fractious G7 and the parallel summit taking place in China this weekend could not be more instructive.

Putin was honored with a medal of friendship and described by President Xi as his best ally. All SCO delegates underlined the strategic importance of fraternal cooperation and multilateralism — the exact opposite of the debacle taking place at the G7 in Canada.

In those two events, we see two diametric visions of global relations. The G7 is all about American bullying for unipolar dominance. Whereas the SCO heralds a new world of multipolar partnership. The former is a recipe for conflict and war; the latter is the way forward for joint prosperity, development and peaceful coexistence.

Ironically, however, the incumbent European powers still don't seem to fully get it.

Admittedly, to a certain degree, their bruised interests and sensitivities seem to demonstrate a realization that they are being used and abused by Washington's hegemonic desires. The Europeans and Canada are huffing and puffing with chagrin and talking about "asserting themselves" without America.

Nevertheless, despite all the huffing and puffing, the Western minions still don't seem to get it.

READ MORE: This is First Time G7 Is So Controversial, Opposed to US – Academic

Paradoxically, it was Trump who said before the G7 summit that Russia should be readmitted to the forum. Previously, Russia was a member of what was the G8, but following the Ukraine crisis in 2014, the other members kicked Moscow out of the club, leveling unfair allegations that Russia had destabilized Ukraine and "annexed" Crimea.

Putin Expects Trump to Fulfill Pre-Election Promise, Improve Ties With Russia
At least Trump seems to have looked beyond that dubious affair, and hence called for Russia to be "at the negotiating table" of a reformed G8.

For their part, European leaders don't seem to have come to their senses. Apart from the dissenting voice of the new Italian Prime Minister Giuseppe Conte, the EU bloc rejected Trump's conciliatory offer to Russia. Germany's Merkel, France's Macron and the others said that relations would not be normalized with Russia "until Crimea was returned to Ukraine".

The Europeans are hanging themselves by their own irrational petard over the spurious Ukraine issue.

Ukraine was, by far, much more destabilized by Washington and the EU's unlawful interference than anything Russia has done. The people of Crimea voted in a legal referendum to join the Russian Federation. Europe needs to get over that illusion and stop making its futile demands on Russia.

The fact is that the EU has inflicted vast damage to its member state economies by sheepishly going along with a US-led NATO agenda of hostility towards Russia. The Europeans have slavishly aped Washington's sanctions against Moscow for no sound reason, only based on hollow and demeaning claims about Russian "interference" and "aggression".

More than 10 years after he told them so, European leaders are slowly realizing what Putin was warning about American bullying, unipolar dominance and its arrogant "exceptionalism".

The operative word here is "slowly". Europeans — the mainstay governments and Brussels establishment that is — still haven't copped on that they are being played for minions and fools by Washington, as is evidenced by their irrational views about Russia and Ukraine.

European leaders — apart from Italy and a few emerging others — are still trapped within a servile transAtlantic role towards American imperialism. It is doubtful that the EU establishment as currently comprised will ever break out of its subservience towards Washington, despite being kicked around by the Americans.

Kremlin on Trump's Call for Russia's G8 Return: We Are Focused on Other Formats
That's why the Kremlin's response this weekend to Trump's "offer" of readmitting Russia to the G8 was spot on.

Russia cooly said, "we are focusing on other formats". That can be taken to mean the SCO, the Eurasian Economic Union and the broader project of building a multipolar global order. Forums, that is, which are based on fraternal cooperation and genuine solidarity, not bullying and unilateral expedience.

In its existing form, the G7 is a bunch of losers. It's a retrogressive world view, not progressive. Russia is better off without.

000000
Popular comments
Not just the greatest leader, President Putin has proved to be a great prophet of our time. One day, an objective historian may give him some of the credit he deserves. But in the meantime, the pygmies who stand in his shadow can only envy him and try in vain to bring him down.
Medvezhonok
9 June 2018, 19:53 GMT1
000000
Putin Told them so, but no one listened.... well actually there was no one on the other side capable of understanding what he was saying & many of them don't realize the heavy price they yet have to pay for ignoring Putin & general common sense.