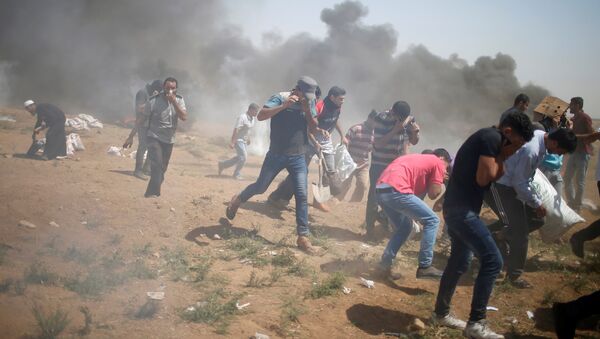 MOSCOW (Sputnik) - A total of 135 Palestinians have been killed in the West Bank and Gaza by the Israeli forces since March 30, when the Great March of Return rally began, the WAFA news agency reported Saturday, citing the Palestinian Health Ministry statistics.

According to the outlet, the majority of the victims (127 people) were killed in protests along the Israeli-Gaza border. It added that, since March 30, 14,700 Palestinians had been injured in the Gaza Strip protests.

The agency also noted that four of the 135 victims had been killed on Friday, when a new protest erupted in Gaza, while 618 people had been injured the same day.

Palestinians Protest at Israeli-Gaza Border for Fourth Week in Row, Four Killed
The situation on the Israeli-Gaza border has significantly worsened over the past several months. The Israeli side has been using lethal arms to suppress the rallies citing security concerns and putting the blame for the escalation on the Hamas radical movement, governing the Gaza Strip.