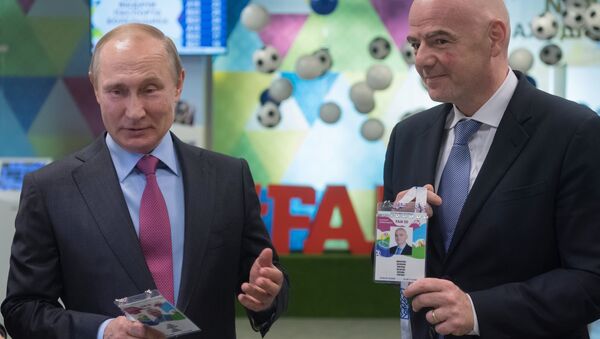 The House of Commons has released a new report on the preparations of the Foreign and Commonwealth Office (FCO) for the World Cup championship in Russia.

Despite the FCO' estimate that it's inappropriate to advise UK citizens against travel to the World Cup, the organization has listed a number of reasons why it wouldn't recommend football fans take the trip.

One of the FCO's concerns is the "volatile state of UK-Russia relations," which they referred back to the "Salisbury incident."

The ties between the two nations are strained in the wake of the poisoning of the former Russian spy Sergei Skripal in Salisbury, England.

Russia has expelled 23 UK diplomats from the country on March 17. "Among those expelled were members of the team working on preparations for the World Cup," the report notes.

"We believe it was wrong for the Russian government to expel British diplomats," the paper says. It however failed to mention, the move was a response to the expulsion of 23 Russian diplomats from Britain earlier, announced on March 14. Russian authorities have strongly refuted the allegations by the UK and its allies the Skripal attack was orchestrated by Moscow.

The FCO also found it worrying that while around 150,000 UK citizens travelling to Russia annually, only 8,800 people are subscribed to the FCO's travel advice. It "seems worryingly low, and suggests that many fans intending to go to the World Cup do not receive the alerts."

The FCO summarized its conclusions in one big warning:

"Up to 10,000 UK nationals are expected to travel to the World Cup in Russia. Those fans face a number of risks, including hooligan violence; attacks motivated by racism, homophobia or anti-British sentiment; and terrorist attacks."

In contrast to FCO's cautionary outlook, the FIFA president Gianni Infantino has assured everyone the World Cup in Russia will be great.

"One week before kick-off, I think we can say that Russia is 100 per cent ready and the whole world will witness how welcoming the country is and how the organisation will work out. It will be a great experience for everyone," FIFA boss said in an interview.

He also said FIFA take discrimination, human rights and security very seriously but they weren't concerned about it taking place in Russia.

Earlier this year, the Russian ambassador to the UK Alexander Yakovenko welcomed fans from Britain planning to travel to Russia.

The World Cup kicks off on June 14 and will take place across 11 Russian cities, with the final game hosted at the Luzhniki Stadium in Moscow on July 15.