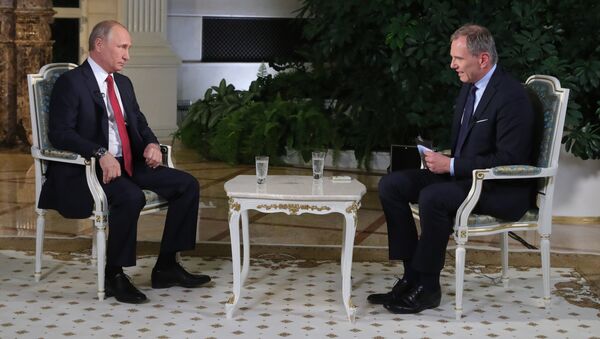 Armin Wolf recently joined the circle of foreign journalists who sit down one-on-one with the Russian president after speaking with Putin ahead of the latter’s latest visit to Austria. One of the most prominent Austrian interviewers explained how Putin makes life hard for interviewers.

Commenting on his recent interview with Vladimir Putin, a journalist with the Austrian public broadcaster ORF, Armin Wolf, told the US outlet Politico that the Russian president was “an extremely canny conversationalist who does a few things that make life difficult for the interviewer.”

The anchorman, who talked to Vladimir Putin ahead of the visit to Austria, explained that it was a challenge for him, as the interview took place in the presidential palace in the Kremlin, where Putin is the “man of the house and every interruption is considered a lèse-majesté.”

After the interview, some were surprised that Wolf interrupted Putin 11 times during the interview; he, however, didn’t consider it anything special. He referred to the interruptions as common practice and stressed that Putin’s reaction had startled him.

“The moment you interrupt him, he focuses on the interruption. Politicians rarely do that. Either they allow themselves to be interrupted or they ignore you and keep speaking. But Putin addresses every interruption, which helps him because after the third or the fourth time, the interviewer appears rude or not particularly interested in his answers,” Wolf claimed.

The journalist also stressed that Putin goes into a lot of details, responds to questions with a question and called him “a world champion in Whataboutism,” who has mastered diverting attention from a subject. Another trait that makes Putin a hard interviewee is that he is extremely controlled.

He also recalled his behind-the-scene experience of dealing with Putin, saying he spoke German and very softly.

“I found that to be the most interesting part. And his German is very good,” Wolf told the media.

Wolf is the not the first journalist to share his experience on interviewing Vladimir Putin. NBC’s Megyn Kelly, who managed to quiz the Russian president twice, gave an excessive account after their first encounter in 2017.

“On camera, he was the Russian president that we've all come to know. He was combative, he was defiant, he was feisty, he was fiery, he was on offense on most of the issues, and he was the Vladimir Putin that Russians love to see. He actually likes to be challenged, and I did challenge him, and it led to a couple of very dynamic, almost explosive exchanges," she said.