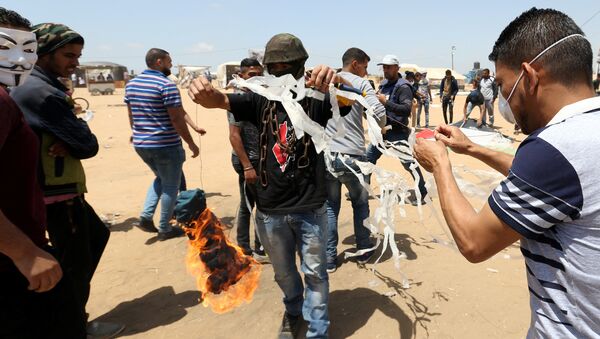 MOSCOW (Sputnik) - About 10,000 Palestinians have gathered along the Israel-Gaza Strip border on the International al-Quds day held on the last Friday of the Islamic holy month of Ramadan, with Israeli forces using dispersal means against those whom they view as rioters, the Israel Defense Forces said.

The Israeli Defense Forces reported that militants started firing their positions from the northern part of the Gaza Strip. Earlier, the IDF announced that they have deployed the Iron Dome air defense system near Gaza amid the raging protests, to prevent security infrastructure and defend Israeli civilians.

"In addition, a number of explosive devices and a grenade have been hurled and tires have been set on fire at the riot locations next to the security fence," the IDF stated.

Moments ago, terrorists fired at IDF troops from the northern Gaza Strip. A hit was identified on the troops' post. No injuries were reported

The IDF went on saying that its troops had increased security measures along the border with the Gaza Strip in order to protect the Israeli people and the country's infrastructure against the alleged attempts by the Hamas movement, which governs the Gaza Strip, to carry out terrorist attacks.

IDF troops are reinforced along the Gaza Strip security fence in order to protect security infrastructure and defend Israeli civilians in the communities surrounding the Gaza Strip from the attempted terror attacks led by the Hamas terror organization pic.twitter.com/NQhOke62cp

In their previous statements, the IDF announced that the al-Quads day demonstration, held in Arab countries on last Friday of Ramadan, gathered about 10,000 rioters.

Approximately 10,000 Palestinians are rioting in five locations along the Gaza Strip security fence. Over the last few hours, terrorists launched dozens of kites and balloons with explosive devices attached to them over the fence. The objects exploded in the air pic.twitter.com/gDGPEre3MM

Meanwhile,  the Gaza Health Ministry reported of 400 Palestinian demonstrators injured and four killed as a result of the erupted clashes with the IDF.

"Three Palestinians were killed, another 618 were injured in clashes on the eastern border," spokesman for the Gaza Strip's Healthcare Ministry Ashraf Qidra said.

Israel's Defense Minister Vows Retaliation for Incendiary Kites From Gaza
Mass anti-Israeli protests annually take place in Tehran and other Iranian cities on Quds Day, which is dedicated to the support of the Palestinian people.

Quds Day was established in Iran in 1979.

Tensions between the Israeli and Palestinians flared up amid the Great March of Return rally, which began in Gaza on March 30.

The Israeli side has been using lethal arms to suppress the rallies citing security concerns and putting the blame for the escalation on the Hamas radical movement.

Since the start of the protests, dozens of Palestinians have been killed and thousands injured.