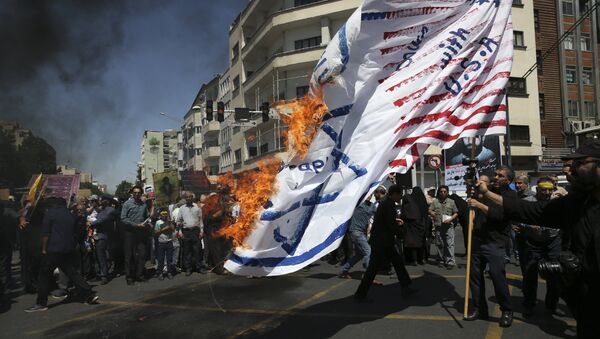 Thousands of people took to the streets of numerous Iranian cities to support the Palestinian state and oppose the Israeli occupation, as well condemn the violence that occurred during the Great March of Return and the US move to relocate its embassy to the disputed city of Jerusalem (al-Quds in Arabic).

Mass anti-Israeli demonstrations annually take place in Tehran and other Iranian cities on Quds Day, which is dedicated to the support of the Palestinian people and held on the last Friday of Ramadan. This year's rallies are aimed at opposing the violence that erupted as a result of the clashes between the Israeli Defense Forces and the Palestinian protesters along the Gaza Strip border.

Quds Day was established in Iran in 1979. On that day mass demonstrations took place in Arab countries in support of the Palestinian people. On Friday, demonstrations were held in Yemen and Iraq. Several thousand demonstrators took part in a peaceful procession in Damascus.

We could be more destructive to the Zionists than they are, but that's not our way.
We don't hate the American people, we hate their system.- speaker at Jakarta rally in front of US Embassy#يوم_القدس_مسيرة_العودة#QudsDay4Return#QudsDay2018#QudsDay#GreatReturnMarch pic.twitter.com/Kax9lwWMa5

According to the IRNA news agency, Iranians are participating in rallies in over 900 cities and towns. The media outlet added that the protesters displayed banners stating: "Victory of resistance front, the defeat of US-Zionism sedition, Palestine determination for return."