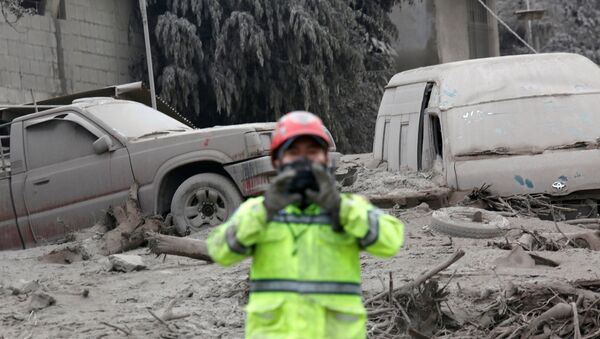 It updated on Thursday the previous day’s count of 99 victims after ten more bodies were delivered to local morgues, according to a statement on Twitter.

"Now this request goes to the international community to allow assistance to Guatemala," the nation’s Foreign Ministry said in a statement. State prosecutors are investigating lack of emergency response that caused loss of life. The disaster is considered to be Guatemala’s most violent volcanic eruption in over a century.

Guatemala Volcano Eruption Claims Nearly Hundred Lives (VIDEO)
Meanwhile, the United States is sending emergency aid and other resources in order to assist the victims of a volcano eruption in Guatemala, the White House said in a press release on Thursday.

"At the request of the Government of Guatemala, we are sending emergency aid, including financial resources to help meet food, water, and sanitation needs for the affected population," the release said. "The United States is also sending aircraft to assist in transporting burn victims of this terrible event for treatment in Florida."

The White House added it will coordinate with the Guatemalan government and send additional aid if needed.

Mexico’s foreign, health and interior ministries will dispatch by the end of the day "a team of medical experts who will help with medical examinations of affected Guatemalans… and, if necessary, bring them to Mexico for treatment," the statement read.

Before and after satellite images show the extent of the destruction wrought by Guatemala's Volcán de Fuego.
The village of San Miguel Los Lotes was almost completely buried. At least 200 still missing.
Pic via @AP https://t.co/sKEBwXhPOz pic.twitter.com/0BpSRx6NzE