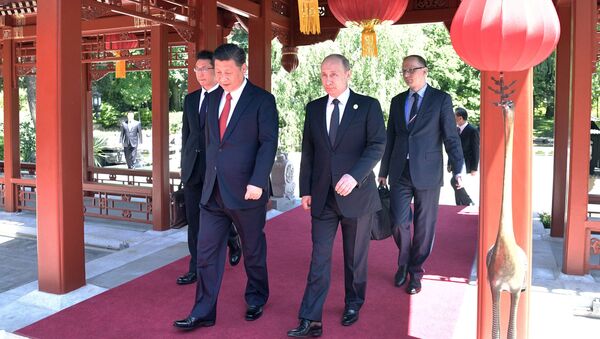 Putin is scheduled to pay a state visit to China from Friday to Sunday and to attend the 18th Shanghai Cooperation Organization (SCO) Summit, Chinese Foreign Ministry spokesperson Hua Chunying said at a press conference on Tuesday.

It will be Putin's first visit to China since winning a fourth term as president and the first meeting with Chinese President Xi Jinping this year, Hua said.

Military Capacity of SCO Not Aimed at Confrontation - Putin
Chinese observers hailed the direct contact between the two leaders, saying that as the top architects in their respective countries they fully exercise their "strategic guidance" role during the frequent summits they have attended.

"Head-of-state diplomacy is the most advanced form of diplomacy, and close personal relations between Xi and Putin are a sign of an extremely high level of mutual trust between the two countries," Li Xing, director of the Eurasian Studies Center at Beijing Normal University, told the Global Times on Wednesday.

Jiang Yi, deputy director of Russian studies at the Chinese Academy of Social Sciences, said the frequent meetings between the leaders "constantly inject impetus into the development of bilateral relations between China and Russia."

Xi and Putin are scheduled to meet privately, participate in the SCO summit, hold a joint press conference and attend signing ceremonies and cultural activities. They will exchange views on bilateral relations, key areas of cooperation and other international and regional issues of common concern, said Hua.

The two sides are expected to issue important political documents and sign a series of cooperation agreements in various fields, said Hua.

Re-Election of Putin, Xi to Promote Continuity of Russia-China Ties - Analysts
According to report, China is Russia's top foreign trade partner, accounting for 15 percent of Russia's total foreign trade, with bilateral trade growing by 31.5 percent in 2017 to $87 billion.

The Xinhua News Agency reports trade continued to expand rapidly in the first quarter of 2018 with a year-on-year increase of nearly 30 percent.

China-Russia trade is likely to exceed $100 billion this year, said the Ministry of Commerce in April, according to a Xinhua report.

"Clearly, both leaders are working on transforming the political mutual trust into higher level cooperation on trade," Li said.

An agreement on trade and economic cooperation was signed between the EAEU and China in Astana on May 17, marking an important step in linking the Eurasian Union and the Silk Road Economic Belt, which is part of the China-proposed Belt and Road initiative, Russian media reported.

Li described the prospect of economic and trade cooperation between the two countries  as "promising," saying that "besides traditional sectors of energy and outer space, more state-level projects will emerge to include new transportation infrastructure projects."

The 18th SCO summit will be held in the eastern coastal city of Qingdao on Saturday and Sunday. It will be the first for India and Pakistan as full members, after their status was elevated at the Astana summit in Kazakhstan last year.

"Against the backdrop of US Donald Trump administration's 'anti-globalization' tendency and UK's Brexit in  Europe, the SCO has become more influential on the world stage with its value and principle, known as the Shanghai Spirit, increasingly acknowledged and appreciated by Eurasian countries in the region," Li said.

China and Russia are the main engines of the SCO, and their cooperation will benefit regional and world stability and  prosperity, Jiang said.