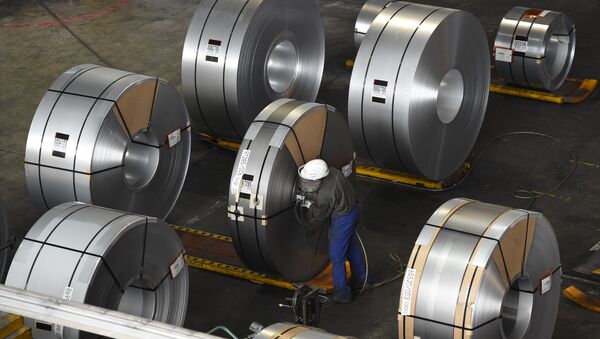 © AFP 2021 / Tobias SCHWARZ
Subscribe
WASHINGTON (Sputnik) - The escalating tariffs conflict between the United States and the 28-nation European Union (EU) is accelerating the process of the disintegration of the Atlantic alliance, analysts told Sputnik.

The College of EU Commissioners endorsed on Wednesday the decision to impose rebalancing duties on the set of US products it had submitted to the World Trade Organization (WTO) effective from July, as part of EU response to the steep US tariffs on imported steel and aluminum, the European Commission’s press release said.

The filed complaints came in response to President Donald Trump’s decision announced on Friday to impose a 25 percent tariff on steel imports from the European Union, Canada and Mexico while aluminum imports were subject to a 10 percent duty.

The United States was inevitably inflicting serious damage on its own trade, economy and international relations, threatening the transatlantic relationship by plunging unilaterally into the tariffs conflict, University of Pittsburgh Professor of International Affairs Michael Brenner warned.

"The logic of international commerce is well established and the implications of unilateralism [are] obviously deleterious," he said.

WTO Confirms EU, Canada Filed Requests for Consultations Over US Import Tariffs
However, Trump and his top advisers appeared oblivious to the dangers they were courting, Brenner observed.

"The complicating factors are these: it is not evident that the Trump people understand these elementary facts of contemporary life; the influence of maverick friends of Trump who speak with him at length by telephone; and President who lacks any rational mind," he said.

Far from helping the US domestic labor force, the tariffs clash and threatened trade war could only hurt them severely, Brenner predicted.

"Workers will lose whatever happens. The only question is how much over what time frame. When the case eventually is adjudicated in the WTO, the US surely will lose," he said.

Brussels was also certain to retaliate in ways that would inflict significant damage on the US economy, Brenner cautioned.

Third of US Voters Think New Aluminum, Steel Tariffs to Hurt US Economy - Poll
The European Union "will make sure that retaliatory measures will inflict similar losses on the American economy. Also, some important economic sectors in the US will be hurt by losing access to European exports," he said.

It remained to be seen if Trump was equally determined on a confrontation with Mexico and Canada, partners with the United States in the North American Free Trade Agreement (NAFTA), which Washington is now renegotiating or if he would adopt a more pragmatic approach to those nations, Brenner said.

The future of NAFTA "depends on whether the moves signal an emerging hard-line on the trade agenda across the board or Trump will seek a deal to offset the trade war elsewhere," Brenner added.

EU More Likely Than US to Win WTO Dispute on Tariffs

Independent Institute Center for Peace and Freedom Director Ivan Eland agreed that the WTO decision on the tariffs case with the EU was more likely to go against the United States.

"The European Union has a reasonably good chance to win the WTO dispute, because the United States' ‘national security’ rationale for the tariffs is nonsense. Trump is using the ‘national security excuses to thinly disguise raw protectionism," he said.

Canadian PM Rejects US Proposal for Bilateral Trade Deal Amid Tariffs Row
However, the European trading bloc faced the prospect of significant damage from a trade war with the United States too, Eland pointed out.

Canada and Mexico also stood to lose substantially from the tariffs being impose do n them, Eland added.

"The tariffs could have ill-effects on NAFTA, because they are also directed at Canada and Mexico, the United States' partners in NAFTA. The tariffs are unnecessarily egregious, especially to Canada, which is a large buyer of US steel," he said.

US Workers Expected to Suffer From Tariffs Retaliation

Eland also agreed with Brenner that US industrial workers were far more likely to be hurt than helped by the new tariffs.

"The tariffs on aluminum and steel may help a narrow slice of American workers, but the retaliation of other countries on US products may make a wider slice of US workers unemployed or underemployed," he said.

US Tariffs Policy Could Ignite 'Much Broader Trade War' - Analyst
The wider impact of the tariffs would also be damaging to the United States, Eland observed.

There has been no weakening of NATO's transatlantic relations despite recent differences between the United States and Europe, the alliance's Secretary-General Jens Stoltenberg said on Wednesday.