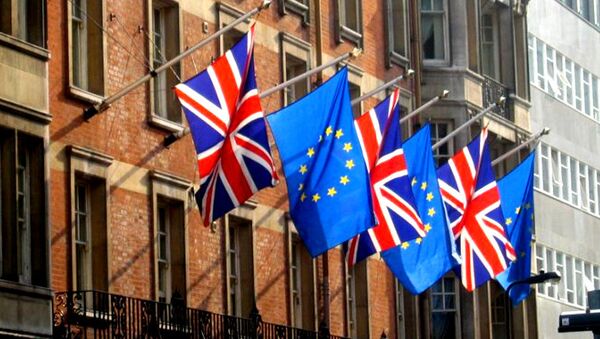 The United Kingdom expects that the future customs arrangement regulating customs affairs between London and Brussels after Brexit should come into effect before the end of 2021, the document released by the office of the UK prime minister said on Thursday.

The UK government said it will be necessary for the UK to continue to participate in any new EU trade deals that come into force during temporary customs arrangement.

The temporary arrangement only comes into force if there is a delay in the implementation of the end state customs agreement, according to a UK government statement.

According to the government statement, it will be necessary for the UK to continue to participate in any new EU trade deals that come into force during the temporary customs arrangement.

The document further specified the United Kingdom had no plans to establish a "hard border" between Ireland and Northern Ireland.

UK Gov't Heading for 'Brick Wall' Over Post-Brexit 'Customs Partnership' With EU
The British government statement said that its proposal suggests applying the temporary customs arrangement to the whole of the UK.

Earlier, UK Prime Minister Theresa May said that the UK would leave the EU customs union in 2020, when the Brexit transition period ends, pointing out that work on customs arrangements with the EU currently remains a priority.

All EU member states are part of the customs union, where all countries have a common tariff on goods transported from outside of the EU, while between the states within the bloc there are no tariffs at all. The British government says it is leaving the bloc's customs union in order to be able to arrange its own trade deals with other countries around the world and now the UK has to agree on an option to replace it.