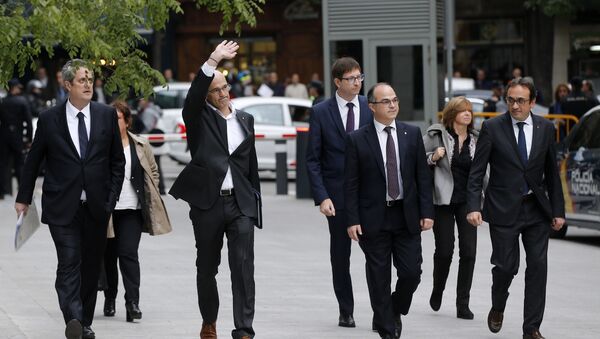 © AP Photo / Paul White
Subscribe
MADRID (Sputnik) – Spain's Constitutional Court rejected the appeal of ex-Catalan leader Carles Puigdemont regarding the lawsuit initiated by the Spanish government against the Catalan parliament's ability to approve its head of government even if the candidate is abroad, according to the court’s statement.

In May, the Spanish government appealed the reform of Catalan lawmakers, which allowed the head of the Generalitat to be elected without the candidate being psychically present in parliament, deeming it illegal.

Even though the former Catalan president, who is currently in Berlin awaiting a German court's decision on his potential extradition to Spain, removed his name from consideration to head the regional government last month, he appealed the Constitutional Court's decision to accept Madrid's claim.

Earlier, the Catalan parliament elected Quim Torra, a lawmaker from Junts per Catalunya party, as the president of the autonomous region. Torra calls himself an interim head of the Catalan government since he believes that Puigdemont remains the true head of the cabinet.

READ MORE: New Catalan Government to Be Sworn in on Saturday

Four Puigdemont's Ex-Advisers Join New Catalan Government
On October 1, Catalonia held an independence referendum, during which the vast majority of voters backed the region's secession from Spain. The plebiscite was not recognized by Madrid, which subsequently imposed direct rule over the autonomous region and dismissed its government. A number of activists and several ministers of the former Catalan government were arrested, while several others managed to leave Spain.