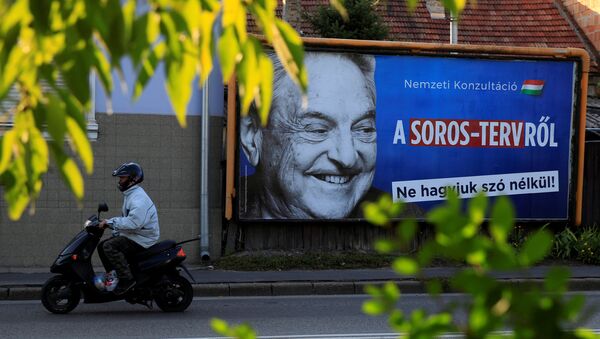 Pedro Agramunt, former president of the PACE, said he had uncovered a network in PACE that works to advance the interests of billionaire George Soros. Sputnik discussed George Soros and his operations in Europe with Francesco Galietti, founder and CEO of Policy Sonar, a Rome-based consultancy specializing in political and regulatory risk analysis.

Sputnik: What do you think about Agramunt's revelations about Soros-funded operations in Europe?

Francesco Galietti: George Soros has been credited for a long time for being one of the very few individuals in the world with his own foreign policy, so it's hardly a surprise that someone like George Soros is now coming under heavy shelling for the way he exerts, he projects, his own influence. What is a little bit more interesting is how this can be triangulated against cases where projecting influence is not illegal at all. So if we consider the case of Italy, Italy is a country, probably the only case that comes to mind in the West, where the funding of Italian political parties from foreign sponsors is not illegal, it’s actually allowed.

So I think that instead of conducting this pattern of analogies of foreign influence and framing it as an illegal, covert operation, in the case like the Italian one we have something completely different. Italy is a place where it is technically and legally possible to fund and sponsor an Italian political party, so the real issue there is where the money of Italian political parties is going to come from. And I have written at length about this topic in my latest essay, which is called “Sovereignty for sale,” it's entirely dedicated to the funding of Italian political parties and foreign meddling.

Francesco Galietti: Not yet really. Let's look at the architecture first: So the Italian system has had its roots political parties. Political parties, because of the design of the entire system, are the entities that […] wield power in the country, so this party is influenced from outside. Outside sponsors can temporarily de facto hold the levers of the Italian state, and that means that political decisions by siding or not siding with a certain ally, and this is very important when it comes to foreign policy decisions and it would obviously affect the Italian Middle East policy, Italian North Africa policy and even more sensitive topics like sanctions, but that’s not the only case where foreign influence would be hugely important.

Italy Says No to Being EU's 'Refugee Camp' Amid Soros' Calls to Compensate Rome
Let's remember Italy is a state where the government has equity stakes in big companies; so if you are a party that wins the election you are not just there to run the country, you also are the majority controlling shareholder of Italian state-owned oil companies, Eni, Enel, and of the security companies, Leonardo, so sponsoring Italian parties is not just a way to influence its political course of action, it is also the means to a different end, i.e., controlling the world of Italian state-owned companies, and if we consider Italy in the world, we can say fairly that Italy’s foreign policy is driven even more so by state-owned companies then by the government itself. So Eni is a more powerful foreign policy actor.

Sputnik: Now George Soros has repeatedly been accused of meddling in elections and political processes in various countries – what goals do you think he’s pursuing? Is he just a businessman or is there something beyond just trying to just get control of certain government-owned companies?

Francesco Galietti: It’s difficult to decouple all his goals, George Soros is many things. Certainly he’s trying to uphold a certain idea, very liberal idea, very globalist idea of the EU, and he’s also famous in this part of the world for having speculated very heavily on the Italian lira several years ago so the feelings of the Italian elite, not just of the population, vis-a-vis Soros, are very mixed, you won't find many friends of Soros in this part of the world because many associate him with speculation on the lira. It’s also fair to say, however, that despite being a strong supporter of the EU as a single lobby, super-national lobby, so despite being an advocate of the hollowing out of sovereign states, he has been increasingly vocal against the economic monetary structure of the EU.

Soros likes the EU, but dislikes member states, dislikes sovereign states, but he does not like the way in which the euro is affecting mutual relations. In recent interviews he has said that the euro has created two classes: one is a class of European creditors and the other is a class of debtors, with the latter ones de facto being the slaves of the former ones, so as always with someone as complex as that it’s not easy to have a straightforward judgment, even Soros himself seems to be backtracking on some of his earlier positions.

The views and opinions expressed by Francesco Galietti are those of the speaker and do not necessarily reflect Sputnik's position.