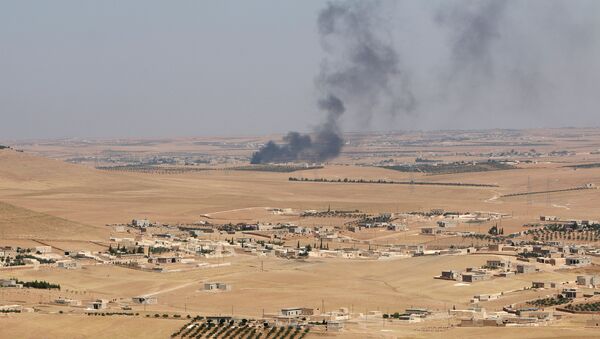 MOSCOW (Sputnik) - The meeting between Russian, US, Jordanian representatives regarding the de-escalation zone in southern Syria will not take place, Jordanian newspaper Al Ghad reported, citing its sources.

"The agreement is a key step within the three countries' joint efforts to stop violence in Syria and create the proper conditions for a sustainable political solution to the Syrian crisis," State Minister for Media Affairs Mohammad Momani said.

The meeting was scheduled to take place this week in the Jordanian capital of Amman at the level of deputy foreign ministries.

The participants of the meeting were supposed to suggest handing over control over Syria's southern de-escalation zone to the Syrian government and the Russian military police after local militants laid down their heavy weapons.

Syrian Army Reinforcements Arrive in Southern Syria as Major Offensive Looms
They were also expected to discuss ways of preventing Iran’s presence in the region, which is the main concern of neighboring Israel.

On May 28, the Israeli media announced, citing sources, that Israel and Russia had reached an agreement to deploy the Syrian government forces in the border area in southern Syria, excluding the forces of Iran or the Hezbollah movement from the area.

The agreement was reached in July 2017, when experts from Russia, Jordan and the United States agreed on a memorandum establishing de-escalation zones in Syria's southwestern Daraa, Quneitra and Suwayda provinces, after Russian President Vladimir Putin and US President Donald Trump met face-to-face for the first time on the sidelines of the G20 summit in Germany's Hamburg.