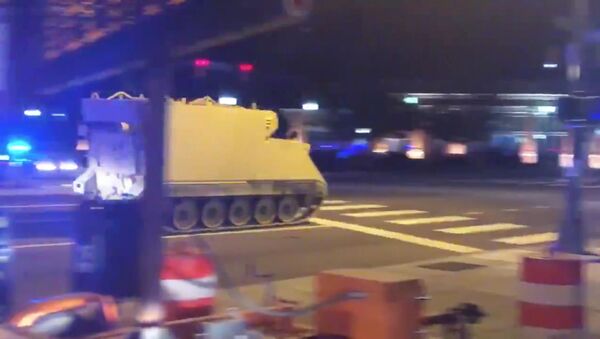 It seems like a man, who stole what Twitter users have described as a “tank-like” vehicle has run his GTA star level all the way to the top as media reports have suggested that at least 30 police cars took part in the chase.

An armored personnel carrier was hijacked from a National Guard base, Ford Pickett, in Blackstone, Virginia, around 8 p.m., and the police had to pursue the vehicle all the way to the city of Richmond, a two-hour drive.

The extraordinary incident couldn’t go unnoticed on social media, with people tweeting videos and snaps from the scene:

This is INSANE! Someone has hijacked a “Tank-like” vehicle from Fort Pickett and just drove it by our apartment! This is on Broad Street in the Fan. pic.twitter.com/EYfhFux1dk

Got em! Curious if it ran out of gas. Thing looks like it had the fuel economy of a hummer pulling a Winnebago. pic.twitter.com/l40XJUf0At

Brother in law is a SWAT officer in the #RVA area and snapped this picture tonight of the crazy tank like vehicle that fled from Fort Pickett. Chase ended downtown near the Children’s Hospital. pic.twitter.com/4GYy7r0BC6

I was lowkey mad I wasn’t in Richmond as the chase went on but I was glad to actually see the tank as they pulled it away from where they got bruh who stole it. pic.twitter.com/2Z1iZHJiQJ

Others were extremely excited by the wild chase:

Almost as wild as the llama chase of 2015 pic.twitter.com/9fL49az2mm

If he got out and said “Sorry guys, I’m just really tanked.”, I’d slow clap him for a week.

Ommggggggg!!! I would of been like “Go, go, GO!!” Lmao pic.twitter.com/upYbBYhhyC

Damnit. The day I say “I need to go to bed early tonight” is the day police chase a rogue soldier in a stolen tank into Richmond. 🤦🏼‍♀️ #rvatank

The pursuit ended up with the arrest of the driver, who, according to CBS News, appeared to be a soldier from Fort Pickett. The military vehicle had a maximum speed of about 65 kilometers per hour (40 miles per hour) and wasn’t equipped with any weaponry.

"The Virginia State Police began pursuit of the vehicle since receiving the initial report and traveled along with it from Nottoway County to the City of Richmond. No crashes or injuries occurred during the course or as a result of this incident. The adult, male driver of the vehicle is now in state police custody and the incident is under investigation. Charges are pending," said Corrine Geller, Virginia State Police spokesperson.