If Russia isn’t Fit to Host the World Cup, Who is? 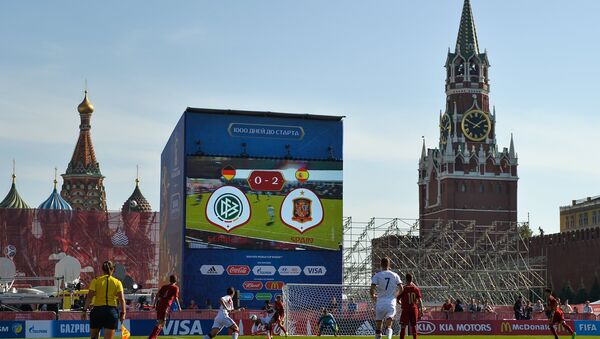 John Wight
All materials
With the 2018 World Cup in Russia fast approaching, excitement over the prospect of feasting on another quadrennial festival of football, this beautiful game that captivates like no other, is not being felt by some – specifically Western liberal commentators and politicians for whom the mere mention of the word ‘Russia’ brings them out in spots.

For example, the BBC television show, The Big Questions, is a Sunday lunchtime staple for a UK audience made up of people interested in the burning moral issues of the day. Week in week out it debates questions and issues surrounding religion, abortion, criminal justice, minority rights, immigration, and so on. Host, Nicky Campbell, is never less than professional in skilfully navigating these difficult and divisive issues, ensuring that all views are given a fair hearing during the course of the debate.

In a recent episode the three questions asked were: Is it ethical to take part in the World Cup? Should you be able to self-declare your gender? And, can the British High Street be saved? Now some might think that those questions would have been more relevant if they’d been framed thus: Is the self-declaration of gender an example of identity politics gone mad? Is the British High Street worth saving? And, if Russia’s isn’t fit to host the World Cup, who is?

But, regardless, that’s another story.

UK Air Force Hits Daesh in Iraq, Syria Over 1,600 Times in 3 Years
The point is that in the lead-up to the 2012 London Olympics imagine what the reaction of the BBC and other pillars of the British media and cultural establishment would have been if TV debates had been held in Russia over the question of whether it was ethical to hold the Olympic Games in Britain? Why not? Surely the country’s role in the destruction of Iraq in 2003 and Libya in 2011 were compelling grounds for this very question to have been asked and debated.

In the UK itself, meanwhile, the nation’s liberal intelligentsia and commentariat took full advantage of the opportunity of London hosting the Olympics to wallow in British cultural and historical tropes, in which no cliché was spared. It was a time to celebrate all things British, to pat themselves on the back for the country’s supposed contribution to the world — for those values of tolerance, liberalism, and multiculturalism that make Britain special.

Ask the people of Serbia, Afghanistan, Iraq and Libya about those British virtues and I’m sure they’d receive an entirely different reaction, and justifiably so, confirming that the attempt to delegitimize Russia’s right to host the World Cup is one that comes dripping in hypocrisy.

What it also confirms is that the oft-repeated mantra that sport and politics don’t mix is tantamount to unthinking nonsense. On the contrary, there is nothing more political than sport. And when it is a global sporting event like the Olympics or World Cup, the level of politics, whether overt or not so overt, is magnified accordingly.

New Safeguards to Stop 'Reckless' UK Prime Ministers From Repeating Iraq Failure
Taken in context, there is nothing wrong in that. The ability afforded host nations of major sporting events to promote their country to the world, to celebrate the best of their cultural values and history, is entirely legitimate – a reality which the millions who tune in to watch an Olympics or World Cup are accustomed to and accept. In fact, more than accept most embrace the chance to watch a given host nation mark and celebrate and present its cultural values to the world.

Sadly, what people have also become accustomed to is the sight of Western ideologues exploiting these events to seize a specious moral high ground from which to engage in an unending exercise in virtue signaling.

Author: Lack of Proof of Russian Role in Skripal Case 'Embarrassing for UK Govt'
Back in March Britain’s never-a-dull-moment Foreign Secretary Boris Johnson was touting the idea of England boycotting the World Cup, using the Skripal poisoning case as a casus belli. At time of writing not one shred of compelling or concrete evidence to support the claim of Russian state culpability in this crime, a claim made soon after it occurred by the UK establishment media followed by the government, while the inconsistencies surrounding the case have given rise to some serious questions which, as yet, remain unanswered.

Johnson went too far as to draw a parallel between the upcoming World Cup in Russia and the 1936 Olympics in Berlin – the so-called Nazi Olympics. Fortunately, in England more rational and wise voices made themselves heard in response. England national football team coach Gareth Southgate was prime among them.

'Let Him Have Fun': Lavrov on Johnson's Russia-Nazi Germany Comparison
Responding to Johnson’s views, the England manager said, “It's little interest to me what the foreign secretary thinks about it [the World Cup]. I was in Russia last year for the Confederations Cup and there were about 15,000 fans from Chile, an incredible atmosphere in the stadiums. It felt like the other World Cups I'd been to.” He continued: “I have spent some time in Russia and felt incredibly comfortable there.”

The upcoming World Cup is an opportunity to transcend the issues that divide nations and to foment amity — if not between governments then certainly between peoples. The magic of football, or soccer, is that it speaks the same language regardless of cultural, religious, ethnic, or national differences in a way no other sport does or can. In the context of a World Cup it reminds us, however briefly, that strip away our differences we are one human family, enriched by our diversity rather than repelled by it, imbued with the same appreciation of the beautiful game.

Delving deeper, US author Dave Zirin has it right: “Sports are more than just a sounding board for war, graft, and mind-numbing moralism. It can also be a place of inspiration that doesn’t transcend the political but becomes the political, a place where we see our own dreams played out in dynamic Technicolor. Politics are remote and alien to the vast majority of people. But the playing field is where we can project our every thought, hope, and fear.”

The views and opinions expressed in this article by John Wight solely those of the author and do not necessarily reflect those of Sputnik.