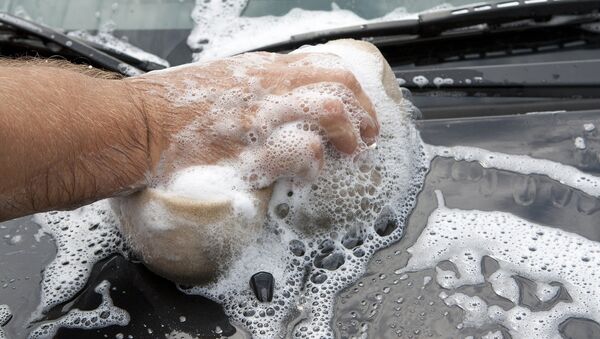 The Safe Car Wash App has been developed to help people spot signs of slavery at car washes in the UK where its believed many people are forced to work as slaves.

"These car washes are often controlled by gangmasters, in many cases employing modern slaves," according to the Petrol Retailers Association which says hand car washes are "rife with criminal gangs which thrive on these very activities. It's estimated that there are more than 20,000 unregistered hand car wash businesses in the UK.

The faith based initiative will help car drivers identify signs of modern slavery by providing a checklist on the app of issues to look out for, including whether the business operated on a cash-only basis, or if there is accommodation on site. Users will be able to locate a car wash using GPS technology and survey the environment the employees are working in.

Safe Car Wash has been launched by the Church of England's Clewer Initiative and the Catholic Church's Santa Marta Group. Clergy have also been asked to promote the app during sermons and public events. Just over six million people regularly attend church in the UK according to website Compassion UK.

Are the people washing your car wearing proper boots and gloves? Do they look afraid? Spot the signs of modern slavery in hand car washes through our app. #SafeCarWash https://t.co/bkyQormbXQ

"Over the last few years we have learned more about the evil of modern slavery and we have begun to understand how it is perpetrated in our communities in plain sight, Anglican Archbishop of Canterbury Justin Welby told the Guardian.

Exciting to see new technology like The Safe Car Wash & Bright Sky apps being used to build social change and support those who may be in need. https://t.co/kzUacaGunD

The data will be shared with the National Crime Agency and the Gangmasters and Labour Abuse Authority. Concerns surrounding slavery in car washes were voiced by the NCA in 2014 involving people from Eastern Europe.

Modern slavery remains high on Britain's media agenda following a series of reports highlighting the failures by the British government to tackle the issue.