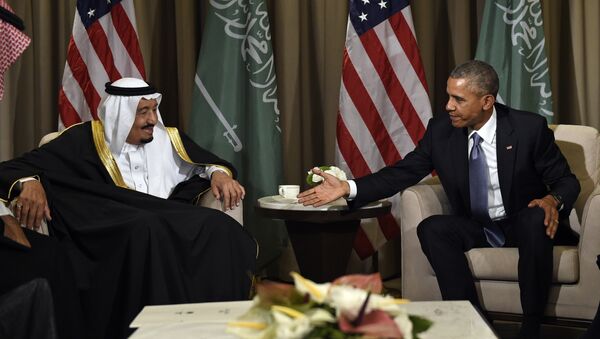 © AP Photo / Susan Walsh
Subscribe
In a book of memoirs published on Tuesday, President Obama’s senior adviser Ben Rhodes unveils some interesting details about a US official delegation’s visit to Saudi Arabia in 2009.

The Saudi authorities gave President Barack Obama’s aides several suitcases with jewels worth tens of thousands of dollars, the ex-president’s deputy national security adviser Ben Rhodes relates in his book, titled “The World as It Is,” which has just come out in print.

According to Rhodes, who also served as Barack Obama’s speechwriter, after their plane landed in Saudi Arabia in June 2009, US officials were taken to what he describes as “identical housing units amid the rolling desert,” in a compound owned by the Saudi royal family, the Guardian reported.

Netanyahu Stood by Obama's 2013 Decision to Pause Syria Strikes – Former Aide
“When I opened the door to my unit, I found a large suitcase,” he writes. “Inside were jewels.”

Rhodes thought it was a bribe aimed at him, because he was writing a speech Obama was to deliver to the Muslim world on his next stop in Cairo, only to find out that others in the White House delegation had received similar gifts.

“We all got suitcases full of jewels,” Rhodes said in an email message to the newspaper, adding that they all handed the pricey presents over to the state protocol office which handles such gifts.

“You have the option to buy the gifts, but given the price – I don’t remember what it was but it was tens of thousands, I believe – no one kept them that I recall,” Rhodes noted.

Rhodes was given a pair of silver cufflinks, a man’s and a woman’s watch, a silver pen, and a diamond jewelry set including earrings, a ring and a bracelet, of an estimated total value of $5,405. Similar gift sets with values of up to $9,000 had been given to 13 other White House staff members.

According to earlier reports, then-Saudi King Abdullah presented First Lady Michelle Obama with $132,000 dollars’ worth of ruby and diamond jewelry all of which, along with expensive gifts to the president and their two daughters  were likewise handed over to the US National Archives, as required by US law.

During his first trip to Riyadh as president in May 2017, Donald Trump was publicly presented with a gold medal and chain by King Salman.

The gifts to his family and accompanying officials have not been made public, though, as the State Department’s protocol gift unit has not yet published its records for 2017, the Guardian wrote.

This information has never been confirmed by Saudi officials.

Saudi Arabia has since emerged as one of the Trump administration’s closest friends and allies, beginning with the mutual flattery of the 2017 visit.

Last month, Saudi Arabia, together with Israel and several other countries, supported Donald Trump’s decision to withdraw from the nuclear agreement with Iran, known as the Joint Comprehensive Plan of Action (JCPOA,) signed by Tehran and the five permanent members of the UN Security Council – the US, France, Britain, Russia and China – plus Germany on July 14, 2015.