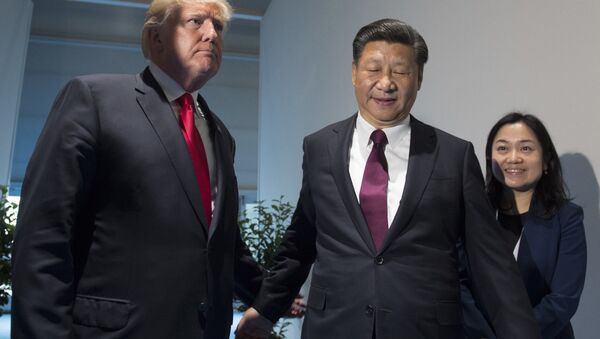 China is not going to bend under Donald Trump's pressure, analysts told Sputnik, referring to Beijing's recent statement issued after Commerce Secretary Wilbur Ross' visit to the country. According to the analysts, the ongoing dispute risks turning into a new round of a trade war.

China and the United States can cooperate in the sphere of trade, but if Washington takes measures against Beijing, the latter will certainly respond in a tit-for-tat manner, said Bian Yongzu, a researcher with the Chongyang Institute for Financial Studies at the People's University of China.

"If the US deliberately creates trade barriers and provokes a trade war, then this is not a market problem, it is already a political problem," Bian told Sputnik China. "Problems cannot be solved this way. According to some experts, the US is deliberately exerting pressure on China."

'Feet of Clay': What's Behind Trump's Flip-Flops on US-China Trade Relations
On May 29 the Trump administration signaled that the tariff war is far from being over: "the United States will impose a 25 percent tariff on $50 billion of goods imported from China containing industrially significant technology, including those related to the 'Made in China 2025' program," the statement said specifying that the measures will take effect on June 15 and 30.

In response to Washington's sudden change of heart which de facto undermined the May 19 joint statement on the suspension of the tariff frictions, Beijing made it clear that once the US imposes new restrictions on Chinese imports, it would nullify all previous agreements reached by the sides.

"China does not demonstrate cowardice, but at the same time does not exert pressure on the US amid trade frictions," Bian pointed out, stressing that Beijing has "a whole set of adequate countermeasures" to respond to Washington's tariff war.

Analyst Predicts 'Inevitable' US-China Trade War Amid Trump's 'Gambling'
He added that while "China and the United States can sit down at the negotiating table calmly, it means that there remains an opportunity to solve the problem and both sides can achieve the desired results from the negotiations."

According to observers, the US representative has not gained any tangible results during the recent meeting.

For their part, the Chinese have issued a statement saying that China is willing to increase imports from other countries, "including the US," to address the needs of the population of the People's Republic of China (PRC).

"All economic and trade outcomes of the talks will not take effect if the US imposes any trade sanctions including raising tariffs," the statement emphasized.

According to Andrei Volodin, an analyst at the Institute of Contemporary International Studies of the Diplomatic Academy, Trump's assertiveness was resisted by Chinese President Xi Jinping, who does not intend to give in without reciprocal moves on the part of the US.

"China behaves logically, because the US trade deficit is the result of the inefficient American economy," the Russian academic opined. "The US deficit in trade with China began to reach its peak in 2005-2006. At that time, China was not so active either in the US market or in the global economy. Therefore, one could say that China's 'dumping prices' didn't affect the American economy. China understands this perfectly. It also makes it clear that its huge financial resources are invested in US securities, which means that the two countries will have to negotiate."

Guns and Butter: How China's Military Buildup Relates to Trade War With US
For its part, Chinese media outlet Global Times presumed that the ongoing trade dispute could become a "protracted" one: "Given the US may change its mind and make new requests from time to time, it is difficult for both sides to nail down a consistent trade pact and stabilize their trade relationship."

Now it all depends on whether the US will give up its plan to impose additional tariffs on Chinese goods on June 15. If Trump's threats become reality the trade war will continue to gain pace.

Meanwhile, China is seeking opportunities to beef up its presence on global markets. Speaking to Xinhua, Chinese Ambassador to Russia Li Hui singled out the Eurasian Economic Union which has "great potential" according to the diplomat. On May 17, the EAEU and China inked an agreement on trade and economic cooperation in Astana.

The views and opinions expressed by Bian Yongzu and Andrei Volodin are those of the speakers and do not necessarily reflect those of Sputnik.