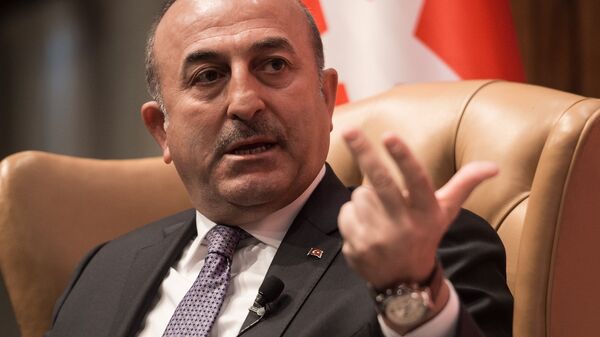 Turkish Foreign Minister Mevlut Cavusoglu has stated that the US hasn’t promised to declare the Kurdish militant group YPG a terrorist organization, while commenting on the progress of the joint work with the US on the roadmap of Syria's Manbij.

"The work on preparing for implementation of the agreement on Manbij will begin within 10 days — we will decide, when the military will enter the area after the withdrawal of the YPG, how they will monitor it, who will govern the region.," Turkish Foreign Minister Mevlut Cavusoglu said.

The minister also stated that the roadmap for Syria's Manbij should be implemented in Raqqa, Kobani, emphasizing that the joint work with the US in Syria is not an alternative to efforts with Russia.

"It is necessary to observe the criteria for ethnic composition as it was before the YPG entered the area. We told Pompeo that the United States had repeatedly failed to keep its promises on the YPG's withdrawal, and if now, after agreeing on this roadmap, they again fail to fulfill it, this will once again spoil our relations," Cavusoglu told reporters.

Cavusoglu explained that Turkey with Iran and Russia created de-escalation zones at the Astana talks, supporting the cease-fire regime. While in Manbij they are striving to clear a certain region from terrorists.

"These are completely different actions. This is not an alternative to our cooperation with Russia. We explain to Russians what we want and what we do, do not hide anything, it's open work on the roadmap," he noted.

Turkey Could Start Anti-PKK Operation in Iraq's Qandil Mountains Soon – Minister
Ankara and Washington have agreed on a withdrawal schedule for the Syrian Kurdish People's Protection Units (YPG) from the Syrian city of Manbij, Turkish Deputy Prime Minister Bekir Bozdag said earlier. Addressing the issue, YPG stated they would withdraw their remaining military advisors from Manbij, also noting that the advisers had stayed in the city after it was handed over to the local council in November 2016. According to the YPG command, the main group of its militants left the Syrian city back then.

"At the request of the military council of Manbij, a group of military instructors from our forces remained as advisers to help the military council, this was coordinated with the international coalition… Now, after two years of work, the military council has achieved self-sufficiency in issues of training, and the YPG command decided to withdraw its advisers from Manbij," the statement, released on the Syrian Democratic Forces (SDF) website, read.

The US State Department has confirmed that the roadmap for the Syrian city of Manbij that Turkey and the United States have agreed to includes the withdrawal of the Kurdish People's Protection Units (YPG) and their replacement by locals, a senior State Department official said in a press briefing.

"The agreement is that the YPG cadres that are involved in governance will withdraw and move and they can be replaced by locals who are mutually agreeable," the official told reporters.

US-Turkish relations have deteriorated amid Ankara's concerns over Washington’s support for the YPG, which is considered by Turkish authorities to be an affiliate of the Kurdistan Workers' Party (PKK), designated a terrorist organization in Turkey.

Ankara has repeatedly blamed Washington for failing to fulfill its agreements regarding the withdrawal of the YPG, who seized Manbij from Daesh* in June 2016.