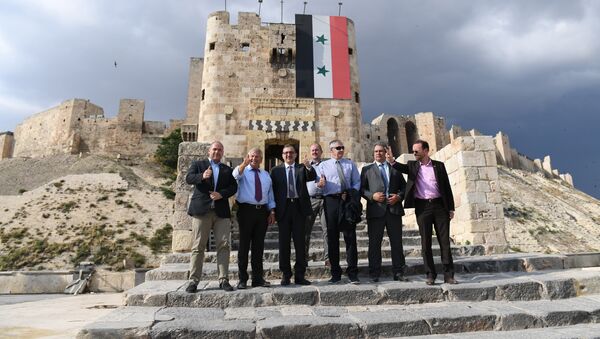 With the situation in Syria slowly normalizing, foreign officials are showing a growing interest in visiting the war-scarred Arab country.

A delegation of lawmakers from the European Union has arrived in Damascus  and will also visit some liberated provinces in Syria, SANA news agency reported on Tuesday.

A spokesman for the People's Council of Syria earlier told Sputnik that a delegation of EU lawmakers from Croatia and Slovakia would visit Damascus and meet with the parliamentary speaker Hammouda Sabbagh.

A delegation of Swedish MPs traveled to Syria in December 2017 to find that EU sanctions imposed on Damascus primarily affect civilians and questioned Stockholm's policy on the issue.

The European Union introduced sanctions against Syria and persons allegedly “responsible for the violent repression against the civilian population" in May 2011, during the Arab Spring protests, which ignited the ongoing civil war in the country.