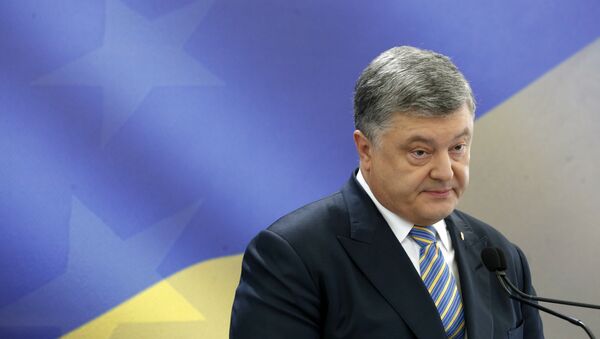 © AP Photo / Sergei Chuzavkov
Subscribe
International
India
Africa
MOSCOW (Sputnik) - Margarita Simonyan, the Sputnik editor-in-chief has commented on the interview of Ukrainian President Petro Poroshenko, who questioned her use of the word "vozhd" ("leader," "chief" or "ruler" in Russian) in reference to Russian President Vladimir Putin.

Earlier in the day, the Spanish newspaper El Pais released an interview with Poroshenko. A journalist told the Ukrainian president that after the victory of Putin in the March presidential election, Simonyan congratulated the Russian leader, calling him a "vozhd." In response, Poroshenko said: "I also believe that the head of RT knew that the term 'vozhd' in Russian means 'Fuehrer.'"

'Russia' Instead of 'US': Swedish TV Caught Peddling Fake News on Syria
Poroshenko was commenting on the Russian word "vozhd," which can be used in a negative context and has sometimes been used to refer to Soviet leader Joseph Stalin.

The Ukrainian President has accused RT and Sputnik news outlets of spreading fake news and misinterpreted Russian President Vladimir Putin's quote on the dissolution of the Soviet Union in an interview published in El Pais.

"Mind you, Putin says that the largest tragedy of the 20th century was not the World War II, not the Holocaust, but the break-up of the USSR," Poroshenko told El Pais newspaper.

Viral
Twitter Afire as George W. Bush Cites Winston Churchill's Fake Quote
However, Putin has never said that he considered other tragic events of the 20th century less significant than the USSR dissolution. In 2005, Putin said the break-up of the USSR was the largest geopolitical catastrophe of the 20th century. He was later asked to give his opinion on the collapse of the Soviet Union, and Putin explained that it was a catastrophe because millions of people suddenly found themselves living in a foreign country, while welfare system and economy were broken.

Poroshenko criticized Russian media in this interview to El Pais, stressing that they should not be trusted and accusing them of spreading the fake news about Ukraine and the rest of the world.

"These are the fake news spread by Russia. It invests hundreds of millions of dollars in RT and Sputnik, Russian tools of influence used in democratic countries… The whole world is trial grounds for Russia's fake news policy. They [fake news] were [spread] during the US election, during the referendum on Brexit in the United Kingdom, during the crisis in Catalonia, and, of course, during Russia's annexation of Crimea," Poroshenko said.

In late May, Kiev introduced sanctions against Rossiya Segodnya Information Agency, which Sputnik belongs to.