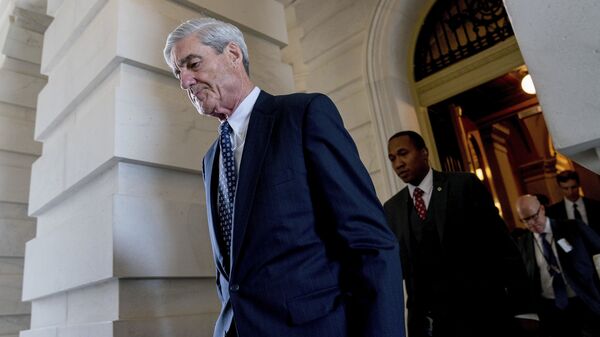 © AP Photo / Andrew Harnik
Subscribe
International
India
Africa
US President Donald Trump's lawyer wrote a 20-page letter to special counsel Robert Mueller explaining that 45 cannot be forced to testify in the Russia investigation and that he cannot be indicted for obstruction of justice because he has absolute authority over all federal investigations, it was revealed Saturday.

The letter, authored by former Trump lawyer John Dowd and obtained by the New York Times, goes on to state that Mueller has everything he needs in the "voluminous testimony and documentation" that has already been provided by the president's legal team.

​Speaking to Radio Sputnik's Loud & Clear, Dan Kovalik, author of "The Plot to Attack Iran," told show hosts Brian Becker and John Kiriakou that the hand-delivery of the letter to Mueller was done in an attempt to prevent it from getting intercepted.

"It's certainly suggestive of a lack of independence," Kovalik said. "You know, Mueller is certainly out to get Trump… he's not dispassionate in what he's doing, to leak this type of memo, which as you say, the Trump team went through great pains to get to them in the most secure way."

Kovalik went on to say he was unsure about the legality of the leak, but fellow guest Dave Lindorff, an investigative reporter and columnist for CounterPunch, clarified that the letter release "wouldn't be illegal."

"I think what's more interesting is to say that a Washington political battle where you have the White House trying to discredit the investigation and get it terminated, and then you have the special prosecutor trying to defend preemptively his authority to continue the investigation. It's all politics… in the end we're not talking about crimes," he added.

To Kovalik, the decision over whether a president can pardon themself will likely be something for the courts to settle.

"We're going to have a huge constitutional crisis that's going to evolve from this," Kovalik, a human rights and labor lawyer, stressed.

But not everyone was on the same page. Jim Kavanagh, the editor of ThePolemicist.net, pointed out that Trump wouldn't be heading to court anytime soon.

"I don't think that this is going to the courts… I think this is a political game disguised as a litigation, disguised as a criminal thing," Kavanagh told Kovalik. "This is disciplining Trump and they're going to keep it going."

"If Trump ever comes to trial for a crime, it'll be because of some financial shenanigans after he's either impeached or he leaves office. They want to just keep the pressure on him… I don't know where this is going to go," he said.

In 1998, US President Bill Clinton was charged with obstruction as part of his impeachment trial. Before then, in 1974, one of the articles of impeachment drawn up against then-President Richard Nixon was for obstruction.