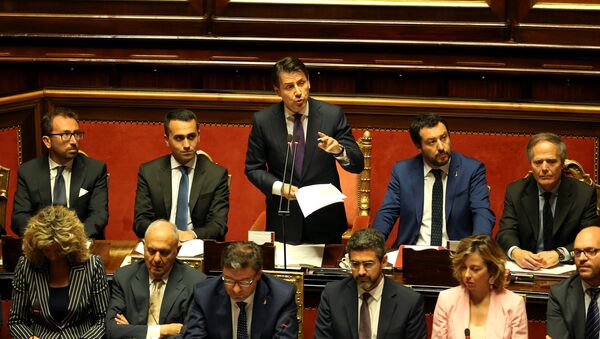 Italy's newly sworn-in Prime Minister Giuseppe Conte is delivering his first speech to the Italian Senate, speaking about the government’s need to reduce the country's huge public debt "through growth," not austerity.

Giuseppe Conte called for EU sanctions against Russia to be reviewed, saying that the government "will promote a review of the sanctions system."

"We will support opening up to Russia… We will push for a review of the sanctions system, starting with those that risk humiliating Russian civil society," Conte stated.

The prime minister has reaffirmed Italy's convinced membership of NATO, with the United States of America as a "privileged ally."

"We want to reduce our public debt, but we want to do so with growth and not with austerity measures," he told senators during his policy speech, after which he will ask for parliament's confidence.

The prime minister pointed out, that his government is going to put an end to the immigration "business" which has grown out of control "under the guise of solidarity."

"The elimination of the gap in growth between Italy and the European Union is our objective, which must be followed in a framework of financial stability and the trust of markets," he stated.

According to the PM, Italian public debt is fully sustainable today. However, its reduction must be pursued, but with a view to economic growth.

"Fiscal and public spending policy should be geared towards the pursuit of the objectives set for stable and sustainable growth. In Europe, these issues will be strongly pushed forward with the aim of change of its governance, a change already at the center of reflection and discussion in all EU member states," he noted.

Italy's Lega Leader Refutes Suggestions of Kremlin's Financial Support to Party
Conte, 53, said the government's priorities would be to address social difficulties through the introduction of a universal income and to originate an influx of irregular immigrants by tackling the "business of immigration."

Conte's speech echoed the policy agenda set out in a coalition accord approved by the 5-Star Movement (5SM), which came out of the protest network, and the right-wing Lega.

The Lega, in particular, earlier expressed hope to decrease the rate of illegal migration, with party leader Matteo Salvini pledging that Italy will no longer be "Europe's refugee camp."

Last week, a coalition consisting of the eurosceptic Lega and the anti-establishment Five Star Movement (M5S) have managed to form a government after weeks of talks and the rejection of their first attempt to form a cabinet. Among other issues, the coalition agreement between the two parties calls for the lifting of anti-Russia sanctions and for Moscow's reinstatement as a strategic mediator of the Syrian, Libyan and Yemeni crises.

Since 2014, relations between Russia and the West have deteriorated amid the crisis in Ukraine. The EU, the United States and some of their allies have introduced several rounds of anti-Russia sanctions after Crimea's reunification with Russia and Moscow's alleged involvement in the Ukrainian conflict. Russia refuted all the accusations and introduced restrictions against the states that targeted Moscow with sanctions.