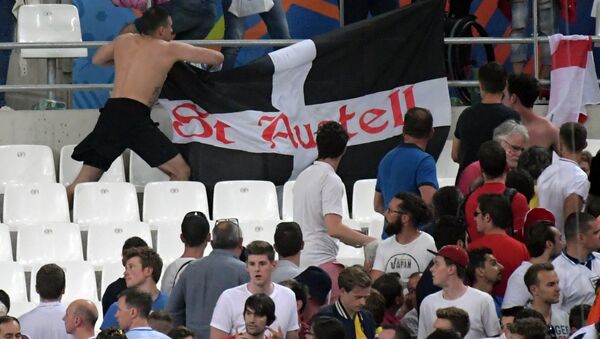 © Sputnik / Grigoriy Sisoev
/
Go to the photo bank
Subscribe
The move comes as British law enforcement authorities seek to avoid violent clashes between the members of English firms and other football fans at the upcoming World Cup in Russia.

About 1,900 football hooligans are banned from attending the world's most important football event, including 132 fans from London football firms, who are blacklisted by Scotland Yard.

According to a statement by Sergeant Dave Hine of the Metropolitan Police Service's (the Met) Football Unit, the police seek to "ensure that no fan who is subject to a football banning order is able to travel through Heathrow airport to the World Cup to watch England."

"Anyone with a banning order who fails to hand their passport in during the next couple of days will have a police officer knocking on their door," the spokesperson added.

England Fan ‘in Critical Condition’ After Hooligans Clash in Marseille
A banning order issued under provisions of the Football Spectators Act 1989 is issued for a number of football-related offences, as a means to preempt violence at sports games.

The Met's call to London football firms comes as part of a broader push by British law enforcement agencies to prevent hooligans from travelling to the World Cup by seizing their passports.

BBC reports that the West Midlands police are following Scotland Yard's suit by urging the 214 registered hooligans to give up their passports or face the court.

This March, the National Police Chiefs' Council (NPCC) branded the behavior of English fans in Amsterdam as "appalling," following their clashes with Dutch police, which ended in some 115 people being detained.

000000
Popular comments
Smart play, protect your citizens from getting the living daylights beaten out of them lol