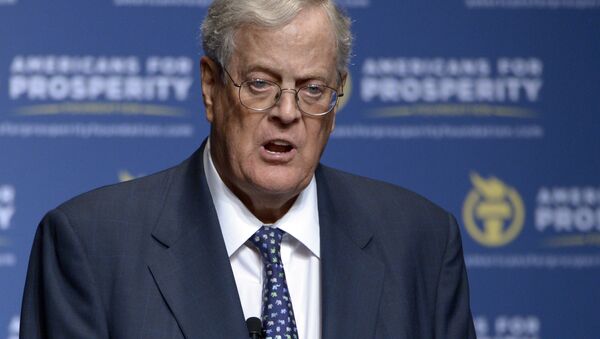 The Koch brothers are stepping onto the warpath as their organization’s network just announced they would spend millions of dollars to counteract US President Donald Trump’s tariff agenda.

Last week, Trump imposed tariffs on imported steel and aluminum from the European Union, Canada and Mexico. As CNBC notes, the Koch-backed network has historically supported the Republican Party and the conservatives in general, but this new measure was a "tipping point."

US Tariffs Policy Could Ignite 'Much Broader Trade War' - Analyst
At least three political advocacy groups funding in whole or in part by the Koch brothers — Freedom Partners, Americans for Prosperity and the Libre Initiative — have already announced their intention to fight against the tariffs. According to a joint statement, the campaign will include media buys, activist education, grassroots mobilization, lobbying and policy analysis.

"This campaign makes a clear statement: Trade is a major priority for our network," said James Davis, executive vice president of Freedom Partners. "We will work aggressively to educate policymakers and others about the facts. Trade lifts people out of poverty and improves lives. It is critical to America's future prosperity and our consumers, workers and companies. Tariffs and other trade barriers make us poorer. They raise prices for those who can least afford it."

"The Trump administration has taken some incredibly positive steps for the American economy," Americans for Prosperity President Tim Phillips said in a statement. "But tariffs will undercut that progress and needlessly hamstring our full economic potential. There are better ways to negotiate trade deals than by punishing American consumers and businesses with higher costs."

"Instead of pursuing protectionist policies that we already know don't work, let's help everyone win by expanding trade, opening new markets and lowering costs," he added.

Canada Files WTO, NAFTA Litigation to Counter US 'Illegal' Tariffs
The groups expressed their own views on the trade policies in the statement. In particular, they advocate for updating the North American Free Trade Agreement (NAFTA) instead of dropping it, as Trump has threatened to do, and finalizing a new trade deal with the United Kingdom after Brexit, when the country stops being a part of the EU at the end of March 2019. They also call for the US to return to the Trans-Pacific Partnership negotiations, which the US formally abandoned in 2017, Roll Call reports.

According to CNBC, the Koch-supported campaign is likely to become a dangerous menace for the Republicans, who are preparing to fend off Democratic attack during November's Congressional midterm elections, and look upon Trump's economic policies as a weapon. With the Koch brothers' campaign, that is going to be much more difficult, as some Republicans have already entered the tariff-fighting fray, The Hill notes.

Retiring US Senator Bob Corker (R-TN) tweeted over the weekend: "I am working with like-minded Republican senators on ways to push back on the president using authorities in ways never intended and that are damaging to our country and our allies. Will Democrats join us?"