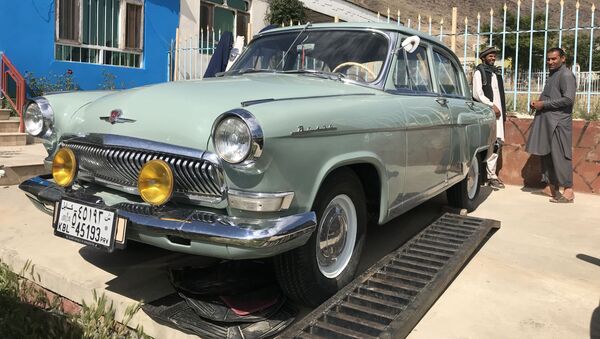 Russian auto exports to Afghanistan date back to Soviet times, to the 1930s. The mass export of Russian cars started in the 1960s. Afghanistan was one of those countries where Russian cars, trucks and buses were commonly seen. However, during the Afghan war, Soviet and Russian cars wore out from wear and tear.

Kabul’s residents told Sputnik what caused the poor demand for Russian cars, as well as why some Afghans still prefer them.

“We sell cars imported from Japan, Canada, etc. We don’t sell or buy Russian cars, as there’s no import of new Russian cars as well as no demand for them.”

Timeless Classics of Russian Car Industry: Lada Niva Celebrates 40th Anniversary
Another inhabitant of Kabul, who uses Russian ZILs to transport stones, thinks that Japanese cars can’t compete with Russian ones in terms of both price and performance in the Afghan highlands:

“As Japanese cars are expensive we use Russian cars. Another reason is that Russian-made cars are durable. The cars are powerful. We use them to go up the hills.”

According to Ziya Sadeghi, another car trader from Kabul, the main reason for the slowdown in the sales of Russian cars in Afghanistan is the lack of spare parts on the market. At the same time, Sadeghi buys Russian cars from his compatriots and hopes that Russian companies will export new cars to the country, as it would help him get new customers and start importing spare parts:

“We sell few Russian cars as new models aren’t imported to the country. We’re provided with cars by car owners but there are few buyers. It’s been a long time since the cars have been brought to the country. We sell two car models – the 1969 Volga and the Niva, which was Afghanistan’s fastest-selling car before, but now nobody buys it.”

Despite poor demand for Russian cars, Afghans charge high prices for them. For instance, a 1969 Volga costs around $15,000. Sadeghi sells Nivas for approximately $4,000.