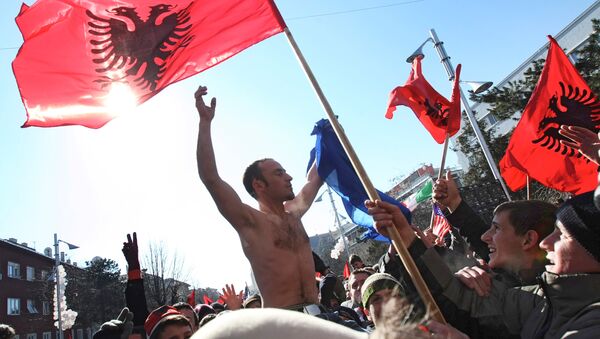 Addressing an increase in Albanian attacks on Kosovo Serbs, Dusan Celic, Professor of Civil Law at the University of Pristina, told Sputnik that he's convinced the attacks were organized in order to "raise stakes " ahead of crucial talks about the fate of Kosovo.

Dusan Celic, Professor of Civil Law at the University of Pristina in Kosovska Mitrovica, said that "in the Albanian political and social environment, nothing happens all of a sudden" and that a period of relative calm in Kosovo gave way to incidents involving attacks on Kosovo Serbs, which "began to occur every day."

"This is a tendency rather than separated incidents. I am convinced that such frequent attacks are directed by numerous informal centers in Kosovo and Metohija. They are created by former followers of extremists from the Kosovo Liberation Army," Celic noted.

He predicted that "the whole truth" will never be revealed and that judicial decisions that have been taken compel him to believe that they aimed to grapple with "a brawl in a restaurant rather than violence aimed at the entire [Serbian] people."

"I'm afraid that if there is no reaction other than a verbal one to what is going on, there will be more consequences. State bodies should take more effective steps in order to protect Serbian people," Celic emphasized.

According to him, neither international peacekeepers from KFOR (the Kosovo Force) nor the EU's EULEX mission in Kosovo can protect the Serbs, "but rather vice versa."

"The presence of the international community's forces in Kosovo and Metohija only gives courage to the state-designated extremists from a self-proclaimed state, who continue to employ violence against the Serbs on a permanent basis," Celic concluded.

Earlier, Serbia's Minister of Internal Affairs Nebojsa Stefanovic told Sputnik that "the Albanian side not only tries to make the process on normalization of the relations with Belgrade meaningless, but seeks to demonstrate that Serbs have no place, neither in Kosovo nor in Metohija.

His remarks came after one of the front runners for the position of the Kosovo Prime Minister, Ramush Haradinaj, declared that if he wins there will be no place for Serbia or Serbian municipalities in Kosovo.

The statement was followed by President of Kosovo Hashim Thaci saying that if Brussels "closed [the] door on Kosovo," all Albanians in the region would unite into one state.

The views and opinions expressed by Dusan Celic are those of the analyst and do not necessarily reflect those of Sputnik.