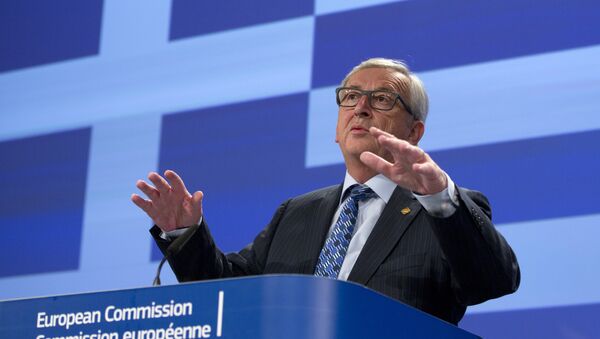 MOSCOW (Sputnik) - The European Union must take measures to protect core provisions of the nuclear deal with Iran, EU Commission chief Jean-Claude Juncker said in an interview out Saturday.

"The termination of the Iran agreement by the US doesn’t benefit global peace," he told the Hannoversche Allgemeine newspaper. As co-architects of the Iran deal, we must defend its core."

Activists Urge Iran to Appeal US Court 9/11 Ruling, Tehran Readies Counter-Suit
He said the 2015 pact to have Tehran wind down its nuclear program in exchange for sanctions easing should not be sacrificed for the sake of US domestic political expediency.

"The Middle East is on the cusp of great turmoil. And we are close," he cautioned.

The agreement was negotiated by UN Security Council permanent member states – Russia, China, the United Kingdom, France, the United States – and Germany. US President Donald Trump withdrew his country from it last month, saying he wanted a broader pact.

Trade Pacts With US

Jean-Claude Juncker has warned member states against being tempted into bilateral pacts with the United States, which would weaken the bloc’s hand in the trade row.

"We must defend our interests and values. And we must act as one. I urge EU nations to resist the temptation to go after bilateral deals with the US. This would weaken Europe," he told the Hannoversche Allgemeine newspaper.

Juncker said he did not want an escalation of the tariff row with the United States after it imposed hefty steel and aluminum taxes on the European Union, but added the EU single market – the world’s largest – was strong enough to take on both Washington and Beijing.

"I don’t want a trade war with the US. But Washington must know: Europeans will not be slaves to American domestic politics," he warned.

The commissioner said the union was bringing cases against the United States and China to the World Trade Organization. Europe accuses China of metal overproduction and infringing on EU firms' intellectual property rights.

Jean-Claude Juncker has denied the single currency union was in for a new financial crisis after Italy’s political uncertainty caused European stocks to drop.

Asked by the Hannoversche Allgemeine newspaper if a eurozone crisis was possible, Juncker said "No. The reaction of financial markets is irrational. I would not draw political conclusions from market changes."

Italy’s two largest euro-skeptic parties – the Five Star Movement and the League – formed a coalition government this Friday after an inconclusive election in March where the populists campaigned against the use of euro.