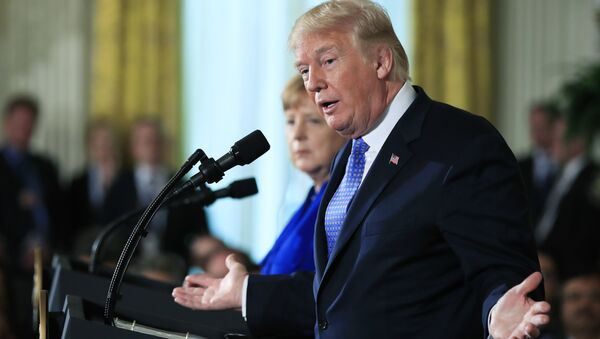 The White House has opted to introduce high metal import tariffs for the EU, triggering threats from the bloc that it will impose counter-measures. While the trade war is looming, the US administration is looking into another measure which could cause multi-billion losses to the European economy: evaluating a 25% import tax on cars.

Donald Trump has allegedly shared with French President Emmanuel Macron his wish to force German luxury car makers out of the US market. The German magazine WirtschaftsWoche, citing several diplomatic sources from both the US and Europe, stated that Trump would maintain his trade policy until no Mercedes models rolled on Fifth Avenue in New York.

Last week Trump ordered his administration to look into whether car imports endangered US security, which was one of his chief arguments for imposing higher steel and metal import tariffs. Following this path, Trump is threatening to levy a 25% tariff on imported European cars.

In the course of the unfolding trade row, Trump has repeatedly criticized as unfair the fact that the EU has a 10% import tariff on US-made cars, while import duties on European cars total only 3%.

As he voiced his grudge over the European producers, particularly the German ones, he also specifically brought up Daimler’s production. After he was elected US President, he said in an interview:

"When you walk down the Fifth Avenue, everyone has a Mercedes-Benz in front of their house. How many Chevrolets do you see in Germany? Not too many, maybe none at all, you do not see anything over there, it's a one-way street.”

According to the preliminary evaluation, the economic impact on the European market of introducing the 25% tariffs would be in the billions. The Ifo Institute has presented calculations that it will cost about five billion euros for German carmakers alone, bringing down the country’s GDP by 0.16%.

According to the media, Germany, which exports more cars, to the US than any other country in Europe, is looking for allies in the bloc to stand up to Trump’s move in his trade offensive.

The joint efforts to talk Trump out of the higher metal tariffs on the US transatlantic allies haven’t helped, as in May the White House announced that Washington would start imposing a 25 percent tariff on steel imports and a 10 percent tariff on aluminum imports from the EU.

Trade tensions between the European Union and the United States have been running high since March, when US President Donald Trump introduced higher tariffs, but let a number of countries, as well as the European Union enjoy temporary exemptions first until May 1 and then for one more month, until June 1.

Responding to Washington's move on tariffs, the president of the European Commission, Jean-Claude Juncker, called them tariffs totally unacceptable and pledged to introduce counterbalancing measures.

A similar stance was voiced by European Commissioner for Trade Cecilia Malmstrom, who pointed out that the bloc would take any necessary steps to protect the EU market from trade diversion.