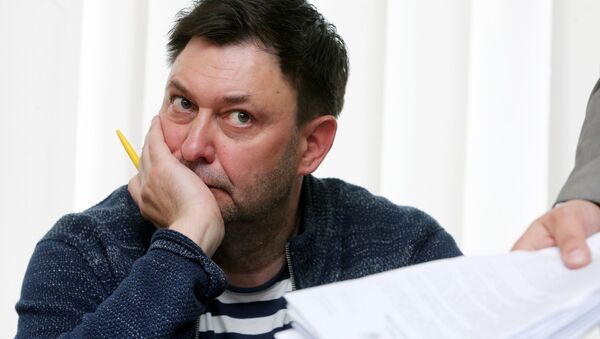 RIA Novosti Ukraine news portal head Vyshinsky said that he hopes that the renunciation of his Ukrainian citizenship will reduce pressure on his family.

Being a Russian citizen, Vyshinsky said that he requested protection and asked Vladimir Putin to take all measures to have him released.

READ MORE: Kremlin on Possibility to Exchange Journalist Vyshinsky: No Initiatives So Far

He also separately thanked Russian President Vladimir Putin and German Chancellor Angela Merkel for paying attention to his case and his attitude towards journalists in Ukraine.

"I will begin by thanking those who supported me all this time… Separately, I want to thank the international community for the attention paid to my humble person and attention to the situation: the persecution of journalists in Ukraine. I am sure that this, to some extent, reduced the pressure not only on me, but also on my colleagues," Vyshinsky said in court.

Kirill Vyshinsky said on Friday that he considered his arrest and further detention illegal, noting that the legal proceedings against him resembled a “torture”.

Vyshinsky urged Commissioner for Human Rights of Ukraine's Verkhovna Rada Lyudmila Denisova to pay attention to his case, as legal proceedings against him violated human rights.

He added that it is senseless to challenge accusations, the verdict on his case is ready.

Ukrainian court ruled to uphold the decision to arrest Vyshinsky, according to the court ruling.

RIA Novosti Ukraine Journalist Arrest Part of Anti-Russia Campaign - Zakharova
Vyshinsky was detained in Kiev on May 15. He is suspected of supporting the self-proclaimed Donetsk People's Republic (DPR) and Lugansk People's Republic (LPR) and high treason. On Thursday, the Kherson City Court decided to place Vyshinsky in pre-trial detention for 60 days without bail.