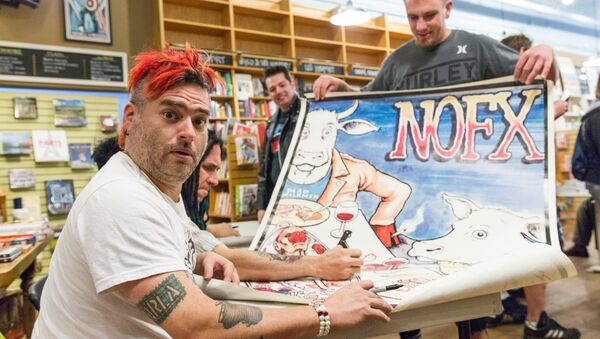 American punk rock band NOFX has always been known for making controversial statements. It’s punk rock, after all. But their latest, a joke about the massacre in Las Vegas, went too far, according to critics, and now a number of the band’s backers have ditched the group.

NOFX's frontman Fat Mike drew boos on stage at the Punk Rock Bowling music festival in Last Vegas Sunday when he joked about the 58 killed and 851 injured in the city on October 1, 2017, when gunman Stephen Paddock opened fire on the Route 91 Harvest music festival from a nearby hotel.

"That sucked," Fat Mike said. "At least they were country fans and not punk rock fans."

The following day, the punk festival, held annually in Las Vegas, condemned the band's remarks, saying "there is nothing funny about people being shot and murdered, ever."

"We would like to offer a formal apology to those in attendance, the City of Las Vegas, the victims and the families of 10/1," the festival's statement read.

Meanwhile, Stone Brewing, a company that makes a beer in collaboration with Fat Mike called Punk in Drublic, after one of the band's albums, and also sponsors the band's music festival of the same name, completely cut ties after the singer's remarks.

According to the brewing company, the joke was totally not punk. Distancing oneself from the band, however, totally is.

"We respect punk rock and the DIY ethos for which it stands. To us, it means standing up for things you believe in and fearlessly committing to what's right," the company said in a statement. "And it is for that reason that Stone Brewing is immediately dissociating ourselves from the band NOFX."

The company added that it will donate all profits from the beer to the Las Vegas Metropolitan Police Department Foundation, "which provides post-Route 91 trauma counseling for officers and other first responders."

One Twitter user pointed out that the company's planned donation was pretty un-punk as well. @LifeinDystopia tweeted "donating to cops is like the least punk rock thing ever."

The band's Twitter account apologized Thursday, saying "I [presumably, Fat Mike], can't sleep, no one in my band can. What we said in Vegas was sh*tty and insensitive and we are all embarrassed by our remarks."