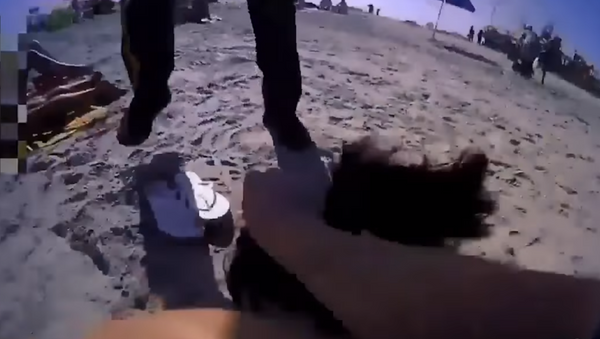 The newly released video shows officers approach Weinman at a Wildwood beach, question the 20-year-old and a friend about underage drinking and make them take a breathalyzer test. The altercation between Weinman and the officers heats up after the woman refuses to give her last name and takes a few steps away from the scene.

​Moving closer to Weinman as she backs up, the responding officer tells her that he's "done" asking for her last name as he asks his colleague for handcuffs.

Moments before the beachgoer is pushed to the ground and repeatedly punched, the officer tells her that she's "about to get dropped." After a bystander tells the officer to refrain from throwing blows, Weinman yells out, "you're not allowed to beat me like that."

"My daughter is right here seeing this," she said. "I didn't do anything wrong!"

It should be noted that the breathalyzer came out negative after Weinman was instructed to take the test by officers.

In a Monday Facebook post, which has since been taken down, Weinman admitted to possessing alcohol, but that she hadn't been drinking. As the video shows, Weinman states that the alcohol belonged to her aunt, who was not seen in the recordings. She went on to add that she was "partly wrong in a way" for not giving the officer her name, but that she didn't comply out of fear, NBC Philadelphia reported.

Prior to the police footage being released, Twitter user Hewitt Lexy posted video of the incident on Saturday, that showed an officer using excessive force.

According to NBC Philadelphia, Weinman is currently on probation for a previous simple assault in the City of Brotherly Love.

An internal investigation into the matter has since been launched by the Wildwood Police Department. The three officers involved in the altercation have been reassigned to administrative duty, pending the investigation.