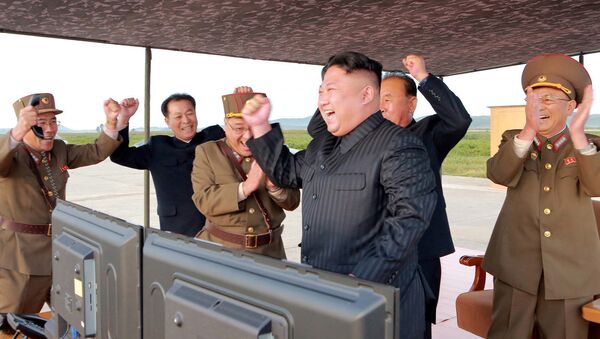 © REUTERS / KCNA
Subscribe
US President Donald Trump announced that it would make him "very happy" to lift US sanctions against North Korea over the country's nuclear program and missile launches.

Trump pointed out that Washington would like to see North Korean denuclearization take place "as quickly as practicable."

The US State Department noted that Trump was not going to use a staged approach to denuclearization.

Meanwhile, US State Secretary Mike Pompeo held what he characterized as "substantive talks" with a group of Pyongyang's high-ranking officials led by Kim Yong Chol, during which they discussed priorities for the potential summit between Trump and North Korean leader Kim Jong-un slated for June 12.

Substantive talks with the team from #NorthKorea. We discussed our priorities for the potential summit between our leaders. pic.twitter.com/y5sMadd84v

Trump: US Engaged in 'Very Productive Talks' With North Korea
During the briefing after the talks, Pompeo announced that North Korean Vice Chairman Kim Yong Chol will be traveling to Washington, DC in order to deliver a personal letter to Trump from Kim Jong-un.

In addition, the US state secretary noted that if North Korea decides to fully suspend its nuclear development program, the country's security will be greater. He went on saying that he believes all the talks talking place between the United States and North Korea in preparation for a possible summit between the US president and the North Korean leader are headed in the right direction.

On Wednesday, Kim Yong Chol, the vice chairman of the ruling North Korean Workers' Party's Central Committee, arrived in New York to hold talks with Pompeo as part of preparations for the US-North Korean summit in Singapore.

According to White House spokesperson Raj Shah, North Korea asked the US government for security guarantees and help with economic revitalization during the recent talks in New York.

"Obviously they’ve asked for security assurances and some help with economic revitalization and access to foreign investment and the like," Shah told Fox News.

Shah expressed optimism that because of Pyongyang’s desire to receive economic support, the United States could reach an agreement with North Korea.

Earlier in the day, President Donald Trump told reporters that he expected the North Korean delegation to travel to Washington to deliver him a letter from the country's leader, Kim Jong Un.

Initially, the Trump-Kim summit was scheduled for June 12 in Singapore, but on May 24, Trump said he was pulling out from the meeting, citing hostilities from North Korea. Shortly afterward, however, the US president said that he was still open to meeting with the North Korean leader.

Trump Considers North Korea Talks Positive, Expects Letter From Kim
Pyongyang responded to Trump's announcement by expressing its willingness to meet with the United States and resolve outstanding issues. North Korea suggested that Trump made this decision based on Pyongyang's unwillingness to accept unilateral requests on denuclearization, as the DPRK has continuously stressed that it was not interested in unilateral demands from the US on denuclearization and would negotiate with Trump only if he was seeking to improve bilateral relations.

The upcoming historic US-DPRK summit was put into question for the first time in early May after the media reported that Pyongyang threatened to suspend talks with South Korea scheduled for May 16 over ongoing joint military drills being conducted by Seoul and Washington. Despite North Korea's warning, Seoul said that it would continue its joint military exercise with Washington.