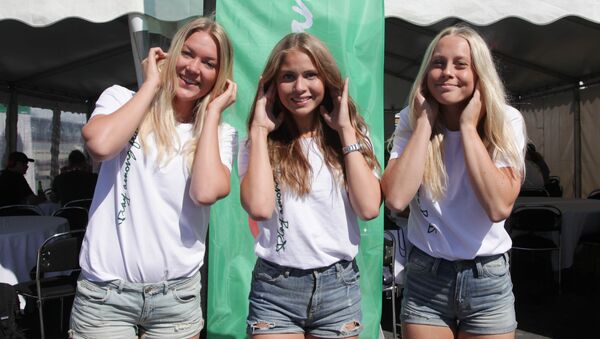 Sweden Democrats leader Jimmie Åkesson has triggered strong reactions by distancing himself from a biological view of the Swedish people. According to Åkesson, one's background and appearance is only secondary to one's ability to adapt and work out a common national identity.

In an interview with Swedish Radio, Jimmie Åkesson, the leader of the right-wing Sweden Democrats, has resolutely dissociated himself from strictly biological characteristics defining the Swedish nation. According to Åkesson, Sweden won't return to being a country of the "blonde and blue-eyed" within the foreseeable future, and doesn't even consider it desirable.

Instead, he argued, adapting oneself to the Swedish way of life is enough to belong to the Swedish nation. One's background or birthplace doesn't really matter, he claimed.

"We are in favor of an open Swedish identity, in which one can actually become Swedish. I've never regarded a people as purely biological, it's more about a group of people with a common identity," Åkesson explained.

According to Åkesson, Sweden will never return to the state of Bullerbyn, a fictional village from the children's writer Astrid Lindgren, whose depiction has indirectly coined the term "Bullerby Syndrome" denoting an idealization of Sweden as a rural place with positive associations, wooden houses and blond people.

"We will not come back to a situation where all Swedes are blond and blue-eyed. And nor is that desirable, it's unimportant," Åkesson explained.

Instead, he continued, the goal is to build as cohesive and conflict-free a society as possible. There should be a high degree of assimilation, he said, where everyone becomes part of the Swedish people.

"If you come here, you have to adapt to the majority regarding basic standards and values," Åkesson pointed out.

In his address to the nation on Swedish national broadcaster SVT, Åkesson stressed that immigration to Sweden will continue even with the Sweden Democrats calling the shots.

"Sweden has always had immigration and always will. Even when I and the Sweden Democrats get to decide, we will have immigration. But it must be an immigration that is strictly regulated and never exceeds what our society can handle."

Åkesson's take on "Swedishness" has triggered a lively debate on Flashback, the nation's most popular forum, with many users admitted that they don't regard immigrants as "fully Swedish" and some people of foreign descent admitting they haven't been striving to become it.

While many users tweeted their support for Åkesson, his election strategy also gathered a lot of reproach.

​William Hahne of the rivaling right-wing party Alternative for Sweden (AfS) ventured that Åkesson once again "denied the existence of ethnic Swedes." "This is yet another tangible example of why AfS is needed," he tweeted.

​Until the advent of the Alternative for Sweden, which was founded earlier this year by maverick Sweden Democrats, Åkesson's party used to be the most right-wing on Sweden's political landscape.

With the AfS striving to gain momentum as a "mass deportation party," some Swedes have ventured that the Sweden Democrats have become "watered down." Nevertheless, the SD are still going strong into the autumn general election, currently polling as Sweden's third-largest party.