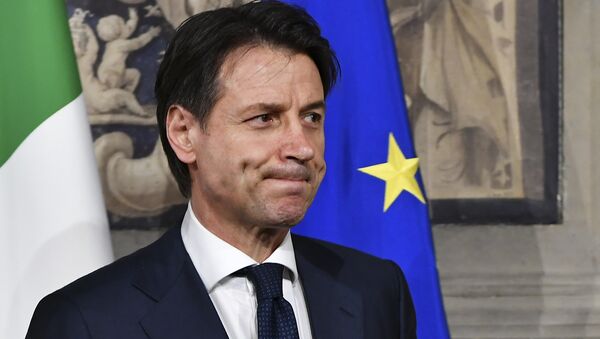 ROME (Sputnik) - Lawyer Giuseppe Conte, who agreed to head the new Italian government, announced on Thursday the composition of his Cabinet.

The speech of the new head of the Italian Council of Ministers was broadcast live by Rai Italia television.

According to Conte, leader of Lega party Matteo Salvini will become the interior minister, while leader of Five Star Movement (M5S) Luigi Di Maio will serve as minister of labor and economic development. Both will assume the duties of deputy prime ministers.

Enzo Moavero Milanesi, who served as Italy's minister of European affairs from November 2011 to February 2014, will assume the post of foreign minister.

Global Markets in Turmoil as Italy Fails to Form New Government
General secretary of the president's office Ugo Zampetti reported earlier that the swearing-in ceremony of the new Italian government would be held on Friday after lawyer Giuseppe Conte presented the list of potential ministers to the Italian president.

"The president received Professor Conte, who was ordered to form the government. Conte took the mandate and presented the list of ministers to the president. The swearing-in ceremony of the new government will take place tomorrow, on June 1, at 4 p.m. [14:00 GMT]," Zampetti said.

After the swearing-in ceremony, the new government must gain the approval of both chambers of the Italian parliament.