Ekaterina Blinova
All materialsWrite to the author
Sooner or later Washington will be forced to pull out of Syria and Iraq, political analyst Ghassan Kadi told Sputnik, suggesting that Russia has become a powerful broker in the Middle East that could provide the US with a "face-saving exit."

"If the US does not leave Syria by its own volition, it will probably ultimately face armed resistance and guerilla warfare," says political analyst of Syrian origin Ghassan Kadi, adding that it is Russia who holds the key to the solution of Washington's problem.

"Time is not on America's side regardless of how deep it digs its heels in," Kadi told Sputnik. "After all, no American military presence outside the US has been bigger than that in Vietnam, and the indications are that the anti-American forces around American bases in Syria are poised to turn north-east Syria into another military quagmire for America."

Referring to the victory of Muqtada al-Sadr's Sairun alliance in the Iraq parliamentary elections of May 12, the analyst suggested that it is likely to result in a revision of the Iraqi-American relationship and al-Sadr's formal request for an American withdrawal. The Shiite politician and his followers have never concealed their extreme displeasure with the 2003 US invasion of Iraq. The Sadrist Movement's military wing openly opposed the American occupation in the early 2000s.

"If this withdrawal is not granted peacefully, American forces may find themselves clamped in between two adversaries who will undoubtedly be coordinating efforts," Kadi suggested. "On the other hand, for as long as there is no threat to create an independent Kurdish state, Turkey will probably sit back and watch."

Control Over S Syria Borders to Be Handed to Damascus - Source
The US-backed Syria Democratic Forces (SDF) in northern Syria has long been an apple of discord between Ankara and Washington. Although the US and Turkey have seemingly reached a consensus on the Kurdish presence in Manbij — which reportedly hosts two American bases — Turkish President Recep Tayyip Erdogan continues to lambast Washington for the provision of weapons and ammunition to the Syrian Kurdish People's Protection Units (YPG), the SDF's backbone. Ankara views the YPG as an affiliate of the Kurdistan Workers' Party (PKK) designated as a terrorist organization in Turkey.

Meanwhile, Syrian local sources have repeatedly reported about Washington's military buildup and the establishment of new bases in Manbij and Deir ez-Zor over the past few months. These reports come in contradiction with Donald Trump's earlier pledge to withdraw US troops from the region as soon as possible.

Unlike US Occupation, Iranian Presence in Syria is Legal

Meanwhile, Washington continues to demand that Tehran pulls its military servicemen out of Syria. For its part, Damascus has made it clear that Iran's withdrawal is out of the question.

"This topic is not even on the agenda of discussion, since it concerns the sovereignty of Syria," Syrian Deputy Foreign Minister Faisal Mikdad told Sputnik on May 23. "We cannot let anyone even raise this issue. Those who ask for something like that — and this is definitely not our Russian friends — are considering the possibility of intervention in all parts of Syria, including the support of terrorists in Syria and elsewhere in the region."

Commenting on the matter, Kadi stressed that "unlike the American presence in Syria, the Iranian presence is upon demand of the Syrian Government; i.e. legal."

"In reality, Iran does not need to, or perhaps even want to, stay in Syria once mission is fully accomplished," the political analyst presumed. "The more America asks for Iranian withdrawal from Syria prematurely, the more it puts pressure on its own presence and turns Iranian presence into a bargaining chip for the Russian-Syrian-Iranian side, thus bringing to the negotiating table a possible agreement based on a concurrent withdrawal of both Iran and America." 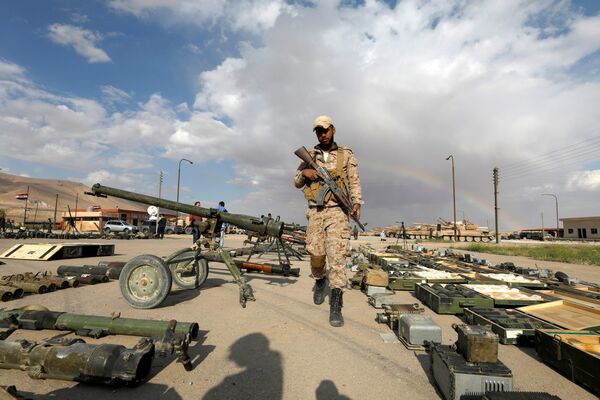 (File) A Syrian Army soldier holds his weapon, as he walks next to others that belonged to rebels from Eastern Qalamoun, after they handed them over, at the town of Dumayr, Damascus, Syria April 22, 2018
© REUTERS / Omar Sanadiki

From 1953 Coup to Bolton's Vow: Why US Regime Change Op in Iran Won't Work
As for John Bolton, the US national security adviser, and his famous vow to foment a regime change in Iran by 2019, Kadi remarked that "with all the appointments and firings in the Trump Administration, Bolton himself may not be around in 2019."

But that is not all, according to the analyst: "A democratic 'regime change' from within Iran needs a much stronger opposition than the existing one."

"Furthermore, a military one ['regime change'] needs virtually bottomless resources, and preparedness to make diversions for contingency plans that may involve military action that may eventuate into an all-out war. With its current economic woes, America cannot afford to engage in another large-scale war because it simply does not have a few trillion dollars sitting on the side to finance it," Kadi opined.

How Russia Could Untie the Syrian Knot, Help US Save Face

Assessing the results of the US' Middle Eastern policy over the last four decades, the analyst pointed to the "failure of US diplomacy and its inability to broker any deal."

Moreover, it turned out that Washington even failed to ensure the security of Israel — its closest partner in the region, he argues.

According to Kadi, "the American presence on Syrian (and Iraqi soil) complicates the matter even further, not only because America does not know what to do next, but also because it does not know with whom to negotiate any face-saving exit."

Under these circumstances, Russia emerges as the only player capable of sorting out the mess left by Washington: "Russia does not only have a legal military presence in Syria, it didn't only win the war against ISIS [Daesh]*, but it is also the only entity that is on 'talking terms' with all of Syria, Iran, Turkey, Israel and the United States," the analyst explained.

"Unless all parties decide to go into a war of mutual self-destruction and annihilation, they will all have to listen to the Russian voice of reason," Kadi highlighted, adding that Washington has found itself in "such an untenable situation that, most ironically, only Russian diplomacy can salvage."

*Daesh (ISIS/ISIL/IS) is a terrorist organization banned in Russia.