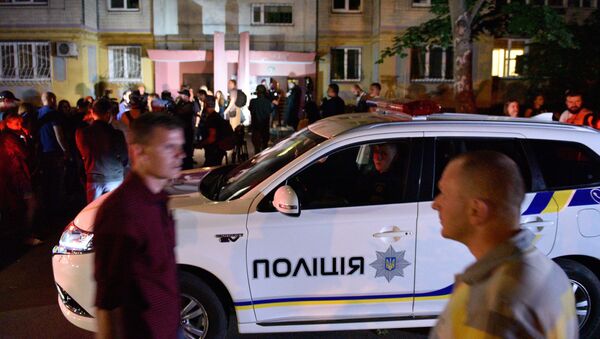 © Sputnik / Stringer
/
Go to the photo bank
Subscribe
The Kremlin has commented on yesterday's killing of a Russian journalist in Ukraine, saying that the country has become a "very dangerous place" for journalists and expressing hope for a thorough investigation.

"We strongly condemn this murder. We hope for a real, rather than sham investigation to identify those behind this murder," Peskov told reporters.

The spokesman expressed his condolences to family and friends of murdered Arkady Babchenko, noting that the incident was very tragic. He also stressed that Ukraine was becoming an increasingly dangerous country for journalists, as they were getting either murdered or jailed lately, which the Kremlin considered totally unacceptable.

According to Peskov, Ukraine's statements about Russia's involvement in the murder of Russian journalist Babchenko in Kiev are cynical.

"In the wake of such a brutal murder, rending the air in such a Russophobic manner instead of talking about the need for a thorough and impartial investigation is the height of cynicism," Peskov told reporters when asked about the Kremlin's attitude toward Kiev's accusations.

"We believe that this should be a subject to a very harsh international reaction that will encourage the Ukrainian authorities to take effective measures to improve the situation," Peskov noted.

A similar stance has been voiced by the Russian Foreign Ministry later in the day, which stated that such crimes against journalists in Ukraine became a "routine".

"The murder of Russian journalist Arkady Babchenko was another tragic illustration of the terrible situation in Ukraine concerning the physical security of media representatives. Impunity of crimes against journalists is total, turning into a frightening routine," the Russian Foreign Ministry said in a statement.

Meanwhile, Russian upper house speaker Valentina Matviyenko has also extended her condolences over journalist's murder and said that Russia would provide help and support to his family.

RIA Novosti Ukraine Journalist Arrest Part of Anti-Russia Campaign - Zakharova
On Tuesday, Babchenko, who moved to Ukraine in 2017, was shot dead near his apartment in Kiev. The Ukrainian police have launched a criminal investigation and said that two reasons could be behind the assassination, namely, the journalist's work and his position on some political issues. Ukrainian lawmaker Anton Herashchenko said one of the versions of the murder to be considered by investigators is "the actions of Russian security services."

Ukrainian campaign against Russian media has been intensified recently. On May 24, Ukraine announced that Sputnik news agency would be included on Ukraine’s sanctions list for three years, meaning the news agency’s assets would be blocked.

On May 15, the Ukrainian Security Service (SBU) broke into the office of the RIA Novosti Ukraine in Kiev and detained its head Kirill Vyshinsky on charges of treason, accusing him of supporting the self-proclaimed people's republics of Donetsk and Lugansk in Ukraine's southeast. Later, a court in the Ukrainian city of Kherson ruled that Vyshinsky should be arrested for 60 days without bail.